After gaining new friends (and enemies), Clementine has found her way into the lives of more survivors. Now, she fights for her life against an army of the dead with one wounded companion. How will she beat this new threat?

The episode starts with walkers pounding against the doors of the truck/shed that Clementine and Pete/Nick are located in (Depending on whoever you saved at the end of "All That Remains").

If Clementine helped Nick, he will block the door of the shed with a crate, and Clementine will begin to search around. After moving a large piece of plywood Clementine discovers some jars, to which Nick identifies are filled with whiskey. The two spend the night inside, but Clementine is awoken by Nick throwing the jars at the walls. After a brief conversation and an offer to have a drink, Clementine and, if convinced, Nick, will leave to find the cabin. If Clementine convince Nick, he will distract walkers so Clementine can escape.

If Clementine helped Pete, the episode will open with the two catching their breath inside a small truck. Pete will ask for Clementine to hand him a saw to cut his leg off due to his bite, but he soon decides not to, believing he would just bleed out and Clementine couldn't get him back to the cabin. After they spend the night, Clementine wakes to find a weakened and dying Pete. After a conversation involving his impending death and his fear of dying, Clementine can convince Pete to say goodbye to Nick and go with her, resulting in both of them leaving the truck. If Pete is convinced, he will distract walkers to allow Clementine to escape.

This next part is non-determinant and happens regardless of the player's choices:

After Clementine reaches the cabin, she meets Carlos and Rebecca sitting at the dining room table. They ask where Luke and Alvin are, revealing they left looking for them. Clementine relays that Pete had been bitten/killed, which horrifies the two adults. After the two gather guns, Carlos asks Clementine to look after Sarah while they're out. Clementine watches them leave and goes up to Sarah's room. When Clementines opens Sarah's door, she will surprise Clementine by taking a picture of her when she opens the door. After a conversation, and having the option to take a picture of her, Sarah will reveal she also found a gun underneath the cabin (if Clementine agreed to be friends with her in the previous episode). After pointing it around and determinately being taught how to use it by Clementine, she sees who she thinks is Luke outside approaching the cabin and goes downstairs to meet him. However, she's quick to realize that it's not Luke, but someone else she knows, and is beset by a panic attack. Clementine goes to the door whil Sarah is frozen in fright.

After choosing to open or lock the door, the man will enter the cabin either way and begin to ask Clementine questions. The man snoops around the cabin, looking for any clues as to the inhabitants of the secluded cabin, asks about the group Clementine is currently staying with while trying to avoid some of Clementine's questions, and after he believes he hears something upstairs, he goes to check it out. He goes up to Sarah's room where she is hiding under the bed, nearly being caught. The man, however, does not look there and apologizes for intruding. Before he leaves, the man discovers a picture of Sarah on the floor, which she had taken earlier, (Determinant) and smiles as he realizes his search has come to an end. He also tells Clementine that she has no idea who her people are. Clementine can either continue pretending that she doesn't know what he is talking about or can drop her act and defend them, but soon after, the man tells Clementine not to trust the cabin group before leaving.

Carlos, Rebecca, Luke and Alvin (and Nick, if not saved in "All That Remains") enter from the kitchen entrance where Clementine and Sarah tell them a man had been to the cabin. Rebecca and Carlos heavily question Clementine about the identity of the intruder. Sarah then reveals that the intruder saw the picture of her. At this point Clementine can either take the blame, blame Carlos, blame Sarah or remain silent. The group believe it was Carver looking for them. Luke and Carlos tell the group they will have to pack up and leave for the north, which they quickly tend to and depart on the journey.

The rest of the group crosses the bridge and Alvin will ask for Clementine to search a small house for any food for Rebecca, who insists she is fine. After searching the house, Clementine comes across a hunting knife with which she pries open a chest with canned food in it. Alvin will walk in and ask for the food for Rebecca and to keep the knowledge of said food quiet from everyone else. After the conversation is over, everyone notices a small herd of walkers crossing the bridge and they leave for the large lodge they previously saw.

The group reaches a ski resort and notices it is somewhat reinforced. After Clementine checks the view in case of any followers, she finds some lights flashing near the forest and the bridge, until she notices the group is being confronted by the inhabitants of the lodge. She goes through the group to find Kenny, still alive, along with his new girlfriend Sarita and his friend Walter. The dispute is instantly settled after they see Clementine and Kenny reuniting.

After catching up with Kenny, helping Sarita and Sarah hang up some Christmas ornaments, talking to Walter about dinner and talking with Rebecca about her baby, dinner will be served where Clementine will pick if she wants to eat with Kenny's group or the cabin group. The group you choose to sit with will begin to talk about the other, specifically Luke, Nick and Kenny. Eventually, Luke and Nick will sit at Kenny's table or Kenny will sit at the cabin's table and they will begin to talk and argue. After it's over, Kenny accidentally calls Clementine "Duck" and gets visibly upset. Walter asks Clementine if she could help him outside.

Walter will begin to speak with Clementine outside on how he believes the world is still salvageable and speaks of his partner, Matthew. After Kenny joins the duo, they see a woman peering into the resort. They wonder if she is trustworthy, and Walter ends up giving her a large box of food to help feed her "family." Going back inside, Luke tells Clementine that the man on the bridge was Walter's partner, Matthew, and it would be best for her to not tell Nick or Walter. Nick walks up and can discover who the man he killed was if Clementine decides to show him, but Luke takes Nick away to have a drink before telling Clementine to retrieve the knife she found from her backpack, presuming it was Matthew's. When she goes to take it, Clementine finds it missing and that Walter has it and is standing on the porch inspecting it. Clementine speaks with him where he asks how Matthew died and if Nick is a good man or not. Nick eventually walks up to them, and Walter begins breaking down, asking for Nick to tell him what happened. Walter throws the knife away and the windmill begins to spin rapidly due to the storm, making a loud sound that would lure in walkers.

Kenny, Luke, Carlos, Walter, Sarita, Nick and Clementine go to stop the windmill and fend off the walkers it might lure. Kenny and Luke go to check on the transformer, which had just blown, as Clementine fixes the windmill with the others covering her. After picking off a few walkers, Nick struggles with a walker. Depending on what you told Walter, if Nick was good or not, he would either save Nick or let him be eaten. The latter would result in Nick's death. After Clementine runs inside, the others hear machine-gun fire as a small group walks out from the woods and finishes off the walkers with assault rifles. This group consists of the man who entered the cabin, the woman looking into the resort and two other men, Johnny and Troy. The man is identified as Carver by Carlos, who the former begins to beat. Sarah runs outside to protect her father from harm. Carver orders the group to go inside where he puts everyone on the ground ready for execution. Alvin, Clementine and Rebecca speak of what they should do:

If they surrender, Clementine and Alvin will be sat down. Kenny snipes one of the men and as a result, Carver instantly takes Walter and executes him, saying it was for his man. He then asks Kenny to stop firing otherwise Carver would kill another member of the group. After Kenny fires another shot but misses, Carver picks up Alvin and speaks of someone named George that Alvin had apparently killed. If Clementine tells Kenny to surrender or if she runs to protect Alvin, he will be spared and Kenny gives himself up. If Clementine is silent or tells Carver to stop, Kenny will fire at Carver and hit him in the shoulder, where he gets back up and shoots Alvin in the head, killing him. He will then threaten to kill Clementine or Sarita. At this point Kenny will turn himself in.

If Clementine escapes, she finds Kenny with a rifle trying to save the group while Carver continues to torture Carlos. He successfully picks off the same man if Clementine surrendered and Carver will then execute Walter. Kenny cries out and fires more, still missing his shots. Carver picks Alvin up and Clementine can tell Kenny to fire or to surrender. Firing will have Kenny hit Carver in the shoulder, but not fatally. Carver then gets up and kills Alvin. Carver will then threaten to kill Sarita, to which Kenny surrenders. If they surrender immediately, Alvin will be spared.

Afterwards, Luke is still not present and Carver assumes he ran to save himself. He then orders his remaining people to take the survivors "home", then the episode ends.

This list shows some of the choices made by players that are tracked by the game.

Loyalty: Who did you sit with at dinner?

This list shows the narrative consequences affected by choices from previous episodes of Season 1 and 2. 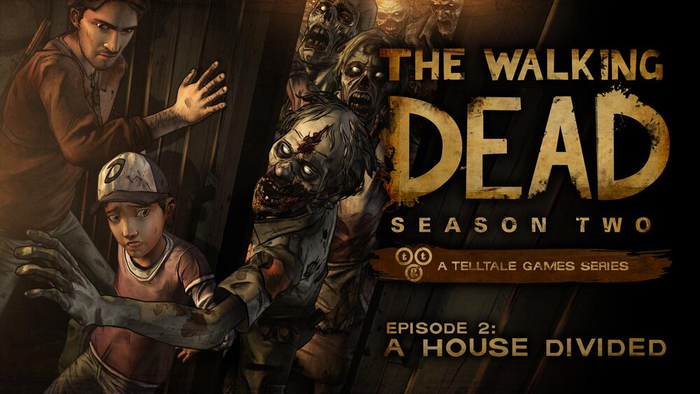 Retrieved from "https://walkingdead.fandom.com/wiki/A_House_Divided?oldid=1389214"
Community content is available under CC-BY-SA unless otherwise noted.