Aaron Brewster is an extra and stand-in for AMC's The Walking Dead and has appeared in Seasons 6-8.

Aaron was a stand-in in "Always Accountable" for Michael Cudlitz and a zombie. He also portrayed one of the Saviors but only his legs were visible. In "Last Day on Earth", he was a Savior sitting in the 1979 Ford Thunderbird and turned on the headlights during the survivor roundup scene in the forest.

In Season 7, Aaron resumed his role as a Savior in "Go Getters", "Rock in the Road", and "The First Day of the Rest of Your Life".

In Season 8, Episode 2 "The Damned", Aaron's character was killed by Tara at the satellite outpost. 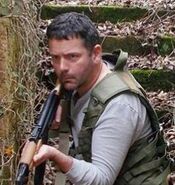 "Rock in the Road"

"Rock in the Road"
Retrieved from "https://walkingdead.fandom.com/wiki/Aaron_Brewster?oldid=1311866"
Community content is available under CC-BY-SA unless otherwise noted.