"After" is the ninth episode and mid-season premiere of the fourth season of AMC's The Walking Dead. It is the forty-fourth episode of the series overall. It premiered on February 9, 2014. It was written by Robert Kirkman and directed by Greg Nicotero.

As Rick deals with old wounds, scattered members of the prison have to come to terms with their new environments and ask themselves if survival alone is enough.

The episode starts at the destroyed prison, with walkers surrounding the tank. Then, the corpse of the Governor, and Flame's devoured corpse are shown, with Michonne outside the fences. She uses her katana to kill approaching walkers and takes cover behind the gate's spikes. Then, she uses her old technique of camouflage and uses two trapped walkers as protection by tying them with ropes and cutting off their jaws and arms. As she walks, she finds Hershel's zombified head and puts it down with her katana, leaving the prison shaken by the experience.

Carl and Rick walk on a country road with Carl walking ahead of Rick who struggles to keep up due to his injuries from the previous battle. At first, they stop by in a barbecue restaurant which seems to be looted already. A single walker is barricaded by some pieces of furniture. Rick wants to put it down with his axe, saving their bullets, but is too weak to make a killing blow forcing Carl to shoot it in the head despite Rick's pleas not to. On the floor, Carl notices a note left by the walker's son, who couldn't bring himself to kill his father. They scour the building for supplies and find a small haul. Carl was able to obtain more stuff and jokingly tells his father "I win".

Michonne and her walker pets come across the same road that Rick and Carl were traveling and she notices footprints in the mud. However, not knowing their owners, she decides to continue on alone.

Rick and Carl continue walking until they take shelter in an abandoned house. After investigating, Carl loudly bangs and curses to draw walkers out, but Rick is angry at him for doing so. Carl snaps back that he isn't a kid, and proceeds to clear the upper floor by himself. He lingers in the kid's room, gazing wistfully at the sports posters and gaming system before yanking out a cable from the TV to secure the front door. As they secure the door, they argue over whether a knot is enough or to push the couch against the door. Carl angrily snaps that his knot is a good one and verbally slaps Rick, mentioning that Shane taught him it. Rick then tells him that he remembers Shane every day and asks if Carl has anything else he'd like to say. Carl doesn't respond and they push the couch against the door and flip it right-side-up. Rick goes into the bathroom of the house and observes the bruises and scars on his body, one of them being the stab wound he sustained from Morgan.

In an apparent flashback, Michonne, her young son, boyfriend Mike and his best friend Terry are at home discussing a movie. It starts off as a normal conversation in pre-apocalypse Atlanta, but as it progresses, Michonne's current situation starts setting in. As she talks to Mike and Terry, it turns into a conversation about survival at a camp that they had inhabited. The world outside slowly becomes the current devastated Atlanta, and the state of the room becomes more and more decrepit. They continue talking and Michonne then sees Mike and Terry with their arms cut off and her son missing. She starts screaming in terror and then wakes up from the nightmare in a fit of panic in the front seat of a car.

In the house, Rick has fallen unconscious due to his injuries. Carl tries to wake him up, but to no avail. In frustration, Carl starts yelling, which alerts two walkers outside. He lures the walkers away from the front door to kill them somewhere away from the house, but gets boxed in by a third walker coming up from behind. However, after a frantic shooting spree, he manages to kill all three walkers unscathed, restating his comment to Rick: "I win."

Michonne continues to move along through the forest. She is taken aback by the sight of a specific female walker, as it physically resembles her. Michonne shrugs it off and continues walking along with her herd.

When Carl returns from his supply run, the sight of his unconscious father sends him into a rage. He castigates Rick for his supposed failure to protect the prison group, then blames him for what happened to Lori and Judith. Carl states that he never forgot how to survive, not even when Rick wanted to "play farmer". When his father fails to respond, Carl says he doesn't need him anymore, and he wouldn't care if he died.

Carl goes on another supply trip in a nearby house. Upstairs, he opens a door with a walker behind it. After a struggle, in which he missed the walker with his gun, he is nearly bitten on his leg but manages to get loose when the walker pulls one shoe off his foot. Carl shuts the door, locking the walker in the room. He finds a piece of chalk and writes "WALKER INSIDE. GOT MY SHOE. DIDN'T GET ME". As he perches himself on the roof of the house, he proceeds to eat a huge #10 can of chocolate pudding with the walker grasping out of the window.

As Michonne continues to walk along with the herd of walkers, she looks again at the walker that resembles her. It's as though she is being confronted with an image of herself, as a reanimated corpse. In a fit of desperation, Michonne frantically slashes the entire herd, including her doppelganger and pets. She makes her way back to the road, and starts following Rick and Carl's tracks.

Carl returns to the house where Rick is still unconscious. Rick begins to move and groan, making Carl believe that he has turned. He grabs Rick's gun, but breaks down sobbing, unable to bring himself to shoot, stating that he does need him. Rick falls to the floor and reaches for Carl's leg. Having realized that he doesn't want to be alone, Carl opens himself for the seemingly zombified Rick. However, to Carl's extreme relief, Rick manages to groan out his name. Carl cradles his father's head in his arms and says "I'm scared".

Michonne reaches the barbecue shack that Rick and Carl found earlier. She finds the note that Carl had discovered and she sits up against the door frame. She says "Mike... I miss you" and starts sobbing, but then states that she missed him even when she was with him. She goes on to reminisce about the camp, and losing her son. She explains how it wasn't Mike's fault, and he could be alive if things had gone differently than they had. She then states that she knows the answer to her problems, which is to allow people into her life rather than shutting them out.

The next morning, Rick tells Carl that he shouldn't have risked going out on his own, but Carl reassures him that he was careful. Rick congratulates Carl on retrieving more food and supplies. Carl then states that he had eaten some of the food. When Rick asks what it was, Carl tells him that it was 112 ounces of pudding, over which they share a laugh. Rick explains that he understands that they will never get things back to the way they were. He then explains the reason he spent the time trying to be a farmer and build a community was for Carl and Judith's sake. He goes on to tell his son that he is a man now and that he is sorry for treating him like a child, to which Carl challenges and makes it clear that Rick was right to act the way he did.

Continuing to search for Rick and Carl, Michonne discovers the can of pudding that Carl was eating, discarded in the street in front of their house. When she walks up on the porch, she sees them together through the window. She starts to cry for joy and then looks up as if thanking God. When she knocks on the door, Rick looks to the peephole and starts to laugh at the sight of their friend. Rick then turns to Carl, and says "It's for you." 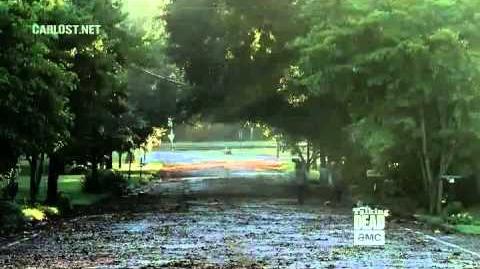 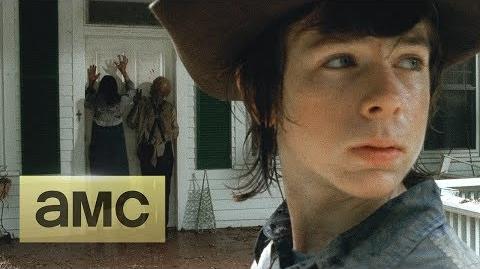