Karina is holding the body of one of her dead compatriots, as she is doing so walkers close in on her and she does not notice. A fellow survivor Paul comes to her aid and cuts down a walker that is about to bite her. He tells her that they have to get out of the area and away from the walkers. After prying her from the corpse they depart into the surrounding woodland.

After losing the walkers they make it to a stretch of road where they locate a vehicle to use, after locating the keys on a dead body Karina discovers Paul has cut himself open in the midst of the camp attack. He tells her not to worry and that a map he found shows the locations of the medical stations in the surrounding areas. Paul says that they should set off immediately and they do so.

Karina drives to many stations is search of aid, however she finds that they have all been overrun. After almost giving up she drives to the last marked station, a hospital, and finds that it is empty. She brings Paul into the shelter on a wheelchair she found for him earlier. Karina finds a supply closet and inside she sifts around for medicine, however she hears a noise and assumes it is a walker coming for Paul. She quickly grabs him and wheels him inside. However a walker almost catches them and she tries to close the door in an attempt to keep it out. The walker stops it from closing and forces it open, Karina tries to shoot it, but misses the head, as the walker begins to descend on her. 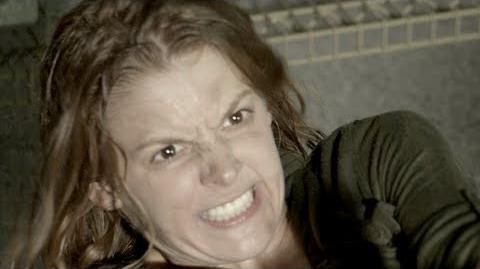