Beside the Dying Fire

Beside the Dying Fire

"Beside the Dying Fire" is the thirteenth and final episode of the second season of AMC's The Walking Dead. It is the nineteenth episode of the series overall. It premiered on March 18, 2012. It was written by Robert Kirkman & Glen Mazzara and directed by Ernest Dickerson.

Rick and Carl return from the woods to find the farm in jeopardy. The group is split up in the ensuing chaos. With things looking grim, Rick's leadership is questioned.

A herd of walkers roams out of Atlanta, attracted by a passing helicopter, which resembles the helicopter Rick saw in the series premiere flying past the same building. The walkers continue down a country road, attracting more walkers along the way. In a field, two herds merge and we watch as time passes and the herd grows, gathering more walkers; eventually, a herd of thousands of walkers forms. The herd passes through a forest at night when a gunshot rings out. They change their course and follow the sound to a clearing, where in the distance two figures — Rick and Carl — march toward the farmhouse.

Daryl and Glenn return to the house and report that Randall is a walker. Hershel asks if they had found the walker that killed him and Daryl points out that Randall was never bitten or scratched, and that he had his neck broken instead.

As Rick and Carl cross a field, Carl asks what happened to Shane. Before Rick can respond, he notices the walkers approaching and, with Carl following, begins to run toward the farmhouse, but the path up to the house becomes blocked by the herd. Rick decides to run toward the empty barn and locks himself and Carl within. As the dead slam against the doors, Rick douses the ground with gasoline and instructs Carl on what to do next.

Meanwhile, the others spot the herd approaching. Lori notices that Carl is missing, and begins to panic. Daryl knows that they can't simply hide in the basement, as a herd of that size could tear the house down trying to reach them. The rest of the group formulate a plan to use their guns to kill as many as they can, and use their cars to lead the rest of them away. Daryl doubts they'll be able to fend off a herd of that size, but Hershel stands firm. "This is my farm.", he retorts. "I'll die here."

Back in the barn, Rick hands Carl a lighter and sends him up to the hayloft before opening the doors. As walkers pour in, Rick hurries up the ladder and Carl drops the lighter. The barn bursts into flames.

Led by Daryl's motorcycle, the caravan makes its way to the barn, shooting walkers as they go. A battle between the survivors and the undead breaks out. Glenn fends off many walkers using Shane's Mossberg shotgun and his car for travel, with Maggie in the driver's seat. Andrea also contributes, with T-Dog driving both in Otis' truck. Daryl, noticing the barn fire, assumes that either Rick or Shane is responsible. He sends Jimmy to rescue Rick in Dale's RV. Rick and Carl jump on the RV's rooftop as walkers surround the vehicle. In an attempt to escape the trapped vehicle, Jimmy is swarmed when walkers break inside and devour him.

Rick and Carl quickly run into the woods, with walkers on their tail. Andrea and T-Dog realize the walkers cannot be corralled and they don't have nearly enough ammo to finish them off. "We need a new game plan.", T-Dog mutters. Meanwhile, Hershel stands in front of the farmhouse shooting walkers one by one as Lori continues to worry about Carl. Carol convinces Lori they have to leave. Lori calls after Hershel, but he ignores her and keeps firing valiantly. As the women flee, walkers grab Patricia and she is bitten while she holds on to a panicked Beth. Beth finally lets go of her hand and escapes with Lori as Patricia gets devoured by the walkers. Carol gets separated from the other two and is cornered. T-Dog pulls up and Lori and Beth get in whilst Andrea gets out to help Carol, shooting two walkers before a third attacks her from behind. She spins around and fires. From the truck, Lori, Beth and T-Dog see the walker fall on Andrea and assume her dead. Walkers swarm the truck and T-Dog drives away. Soon after, Andrea crawls out from under the dead walker, alive and uninjured.

In Shane's SUV, Maggie and Glenn attempt to follow the truck but are cut off by walkers. Glenn instructs Maggie to retreat, but she's worried about the others. "It's lost.", Glenn yells. "Get off the farm now!" Maggie keeps protesting, but after a walker lands on their windshield, she panics and causes the car to lurch backwards, before driving out of the farm. Back at the house, Hershel continues to fend off walkers. Running out of ammo, Hershel steps back to reload as a stray walker creeps up on him. Just before he is bitten by the walker, Rick arrives and kills it, imploring to Hershel that they have to go. Along with Carl, they drive off from a group of walkers swarming up on them. Andrea tries to call out for Rick, but the snarls of the walkers dwarf her cry for help as they begin to swarm her. She flees on foot with the bag of guns. The last to be on the farm is Daryl, who watches the barn conflagration from afar, until he hears Carol's desperate screams. He drives to her aid, rescues Carol on his motorcycle, and they ride away. The barn continues to burn and eventually collapses; the RV is burned in the process. Hershel sadly takes one more look at his farm, now completely overrun, as they leave the property.

At dawn, Glenn and Maggie are driving down a dirt road. Glenn instructs her to circle back to the highway, but Maggie is too paralyzed with fear. Glenn assures Maggie that her family will be fine. "I love you.", he admits. "I should have said it a long time ago." Rick, Hershel and Carl return to the highway next to the car where they left supplies for Sophia. Carl wants to go back for Lori, but Rick is hesitant. "Why are we running?!", Carl screams at his father. Hershel assures Rick he's doing the right thing: "You've got to get your boy to safety.", he says, offering to stay behind to wait for the others. Rick insists they remain together.

Elsewhere, Lori insists that they head back to the highway but T-Dog states that they should head east towards the coast. Lori threatens to leave the truck unless he turns around and when she is close to actually doing so, he complies reluctantly.

Rick is about to abandon the highway when he hears engines rumble in the distance: the other survivors' vehicles. After reuniting, Rick reports that Shane and Jimmy didn't make it; Lori is horrified by the news of Shane's death, but is glad that Carl is okay. Beth then reports Patricia's fate before Carol points out that Andrea might still be alive. Daryl prepares to find her when Rick stops him from leaving, saying "There's no way to find her."

Later, the other survivors caravan down a country road. Hershel's SUV runs out of gas and Rick declares they'll camp by the road and scavenge in the morning, but the others doubt him. "We found each other", against all odds, he insists. Rick does not allow anyone to leave and risk getting stranded without a car. Glenn counters that they're already stranded and even worse, walkers are everywhere.

Rick believes there's a place where they can build a new life. "We just have to find it," he maintains. Daryl brings up Randall, explaining that he turned without being bitten. "We're all infected," Rick murmurs loudly and solemnly. "At the CDC, Jenner told me. Whatever it is, we all carry it." The others become furious at Rick for keeping Jenner's secret, but Rick insists he had no way of knowing if it was true. Rick walks away from the group and Lori follows. "I killed him.", Rick admits to Lori about Shane. "He gave me no choice." he says "I wanted him dead," Rick says. "He turned. That's how I knew Jenner was right," Rick continues. "Carl put him down." Horrified, Lori backs away from Rick. He tries to touch her but she backs away, looking at him with anger for allowing Carl to kill Shane.

Andrea, meanwhile, sprints through the woods, picking off walkers but eventually running out of ammunition. A walker topples her, but before it can bite her its head is sliced off. As the walker's body slumps over, Andrea sees standing before her, a hooded figure holding a katana and leading two jaw-less and armless walkers chained at the neck with shackles.

Huddled around a campfire, the others continue to question Rick's leadership. Carol tells Daryl he should lead the group as a man of honor. "Rick has honor.", Daryl insists. Maggie, too, tries to convince Glenn to abandon the others, but Hershel shuts her down. A noise echoes in the distance. Still, Rick refuses to let anyone investigate. Carol urges Rick to take action and he snaps, saying he never asked to be put in charge. "I killed my best friend for you people, for Christ's sake!" he snaps at the group. Carl buries his head in Lori's shoulder, crying. Rick explains that Shane staged the incident with Randall so he could kill him. Shane gave him no choice.

"Maybe you people are better off without me.", Rick continues, encouraging them to leave him. "I say there's a place for us, but maybe it's another pipe dream." He dares them to leave, but none of them move, though they are all looking back at him in stunned silence. "No takers?" Rick asks. Then he issues a final warning: "If you're staying, this isn't a democracy anymore." Rick turns his back on the group.

As the camera rises up above the trees, a large group of buildings is shown nearby in the dark: a prison. 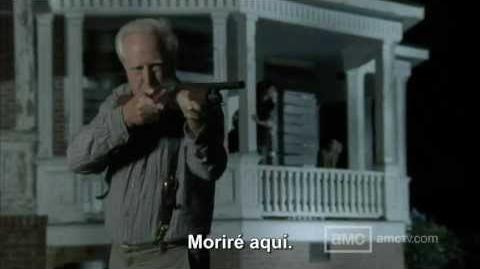