"Bond" is the third and final episode of The Walking Dead Webisodes: The Oath. It is the last episode of the web series overall. It premiered on October 1, 2013. It was written by Luke Passmore and directed by Greg Nicotero.

Karina is seen standing by one of the hospital's windows. Gale walks in and Karina tells her about the time she shot a man in cold blood and that when he was dying from the gunshot a little girl ran out from behind some bushes and started crying. She goes on to explain that she knew she would be the last one left in her group, as it would be her punishment for leaving that little girl alone. Gale tells her that she can offer her an alternative.

Paul is seen struggling to get out of his restraints as walkers close in on him, he manages to tip the stretcher over and wriggle out of the holding straps. He quickly ran to the door only to find that it had been barricaded shut. As he looks around the room for something to defend himself he is able to take out a few walkers, however the walkers continue to close in on him.

Gale is seen gathering an unknown substance into a needle, she tells Karina that it is her oath to help people and that by doing this she is helping her. She walks over to Karina's now restrained body and tells her about the time she injected the substance into another girl's body.

Paul is still trying to open the door while defending himself from the oncoming walkers. He grabs a fire extinguisher and smacks a zombified security guard in the face, he then uses the extinguisher to smash its head in, killing it. Gale is seen injecting the substance into Karina's neck.

After trying to open the door with the extinguisher Paul locates a revolver on the undead security guard he killed. He grabs the revolver and starts to shoot the walkers, after clearing some space, Paul moves back and charges into the doors, breaking them open. He quickly grabs the remnants of the wooden board and barricades the door again. He starts to call out Karina's name, however he eventually stumbles upon a dying Karina and Gale watching over her.

He asks what is going on, to which Gale tells him that Karina, thinking Paul is dead, asked Gale to kill her, believing that she will go on and remain lonely otherwise. An angry Paul raises his gun at Gale and is about to shoot, however it is not revealed whether or not he shot her. Paul is later seen reinforcing the cafeteria door barricade with a steel chain and he finishes by spray painting all "DON'T OPEN, DEAD INSIDE" across them. He is later seen plucking a now re-animated Karina's teeth out and taking her with him into their car. 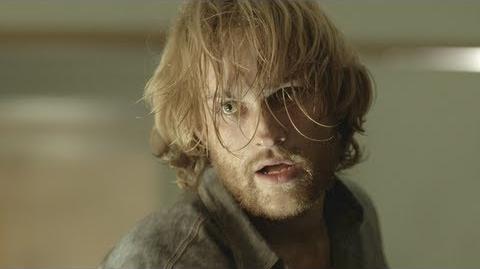