Writer for the TV Series

Channing Powell is an American television writer and producer who serves as a writer of AMC's The Walking Dead.

Powell graduated from Williams College with a Bachelor's Degree in film production. She got her start in the industry as an assistant on the television series, White Collar. While she was there, she made her way up the ranks until she was staffed as a writer and eventually gained credits as an executive story editor. Since then, she has written for other television projects. 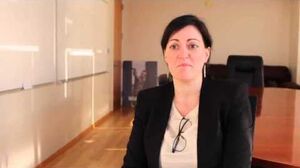 Channing Powell, Writer on Season 4 of The Walking Dead - Exclusive Interview
Interview posted in 2013, by Valhalla Entertainment
Add a photo to this gallery
Retrieved from "https://walkingdead.fandom.com/wiki/Channing_Powell?oldid=1360903"
Community content is available under CC-BY-SA unless otherwise noted.