Karina is about to be bitten by a walker until Gale saves her. Karina asks if she is a doctor, Gale responds that she is and that she can help them. They put Paul on a stretcher and bring him into a treatment room. Gale says she has done all she can for Paul and that they will have to wait and see how things turn out. Karina notices a strap around Paul's right arm and asks Gale what it is for. She tells her that it is a safety precaution in case he turns. This causes Karina to panic and Gale escorts her outside.

The walk into a cross-junction and Karina looks down one of the hallways noticing a door that has been locked shut with a wooden board. Karina looks away and begins to explain her situation to Gale. She tells her of her camp and the attack that took place a night ago. She says that Paul is the only thing she has left, Gale comforts her and tells her about what happened to the hospital. She says that the walkers were not the problem, but a group of hostile people were. She goes on to say that she was hiding in a closet with an attractive young woman named Katie. Eventually the men found them and took Katie away, leaving Gale in the closet. Gale assumes that they left her alone because she was too old.

The two head back to check on Paul, and Gale tells Karina that it is too late. Gale concludes that Paul cannot be saved and she must take him away. Karina tries to stop her, but Gale tells her to calm down and reassures her that there is nothing she can do. Gale takes Paul on a stretcher to the barred cafeteria area, unboards the doors, and opens them. She leaves him inside and re-locks the doors in a hurry.

Later it is revealed that Paul survived and he awakens to find himself trapped in a room full of walkers. He tries to get up but is still restrained by the ties on his arms and legs. With seemingly no way out, the walkers begin to inch towards him. 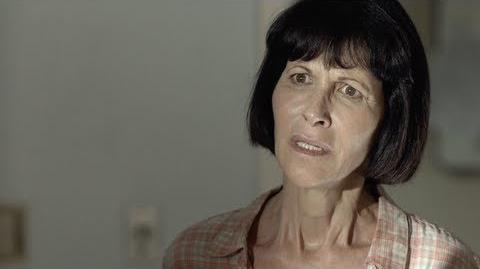