"Dead Weight" is the seventh episode of the fourth season of AMC's The Walking Dead. It is the forty-second episode of the series overall. It premiered on November 24, 2013. It was written by Curtis Gwinn and directed by Jeremy Podeswa.

A new and scary chapter is unfolding at a camp outside the prison. Will peace be attainable with the addition of new members?

Philip is seen playing a game of chess with Meghan. When reminded that it's her turn, Meghan says that she's thinking. Philip tells her that eventually, "You have to stop thinking, and make a move."

Meanwhile, a flashback sequence shows how Philip and Meghan were brought to the camp. Martinez looks down into the pit, and is startled to see a familiar face. Philip seems equally surprised, and holds Meghan tightly.

Martinez offers to assist them, so Philip lifts Meghan over his head and into Martinez' hands. Two men, Mitch and Pete, ask Martinez if he knows him, to which he replies, "Yes."

Martinez looks puzzled when Lilly calls out to Philip as 'Brian'. He asks Philip if he's been on the road with the Chamblers the whole time, because no one has seen him or Shumpert since they left. Philip nods yes.

Martinez then tells him that he and the Chamblers are welcome to join his group. However, there are two conditions. First, he (Martinez) in charge. Second, there can't be any dead weight. Philip agrees, and they journey to Martinez's camp.

Later, Philip goes on a supply run with Martinez, Mitch and Pete. They are following a map made by one of the other camp survivors, when Philip notices something in the distance. As he gets closer, it is shown to be decapitated corpse that has been tied to a tree. A sign reading 'LIAR' is nailed into its chest.

The group arrives at their destination, which is a cabin deep within the woods. As they approach the property, another headless corpse is found. It also has a sign attached to it, with the word 'RAPIST' scrawled in black ink. The group moves onto the porch, and heads toward the front door. Here they find yet another corpse, who apparently died from a self-inflicted gunshot wound. Unlike the others, its head is somewhat intact. The sign on it's chest reads 'MURDERER'.

They cautiously move through the front door, with Philip in the lead. As everyone takes in their surroundings, they can hear a walker moving around in another room. It emerges out of nowhere, and Pete is ambushed and nearly killed, but was saved by Philip. He then notices the reanimated heads of the corpses outside the cabin. Another walker emerges and tries to bite Martinez, but Philip saves him as well. Afterwards, the four find supplies, as well as a six-pack beer. Pete wonders what drove a person to do something so horrible, but Philip suggests that they not dwell on it. Mitch then asks what Philip did for a living and what he did when the apocalypse first began; the latter dodges the question, simply saying that "[he] survived". He then asks them the same question. The reveal that they both are brothers and served in the army at some point; when the apocalypse began, Mitch left and took his tank with him, while Pete was serving at Fort Benning and initially stayed to provide support, but soon left.

While they were gone, Lilly decides to form a makeshift nurse's station and helps bandage Alisha's hand. Tara notices Alisha's M4 carbine and remarks that while it's a good long range weapon, it becomes cumbersome and unreliable due to dirt and debris. Alisha jokingly asks if she's 'always full of shit', and Tara says yes. Later on, the supply group returns and they share some beer with Martinez so tipsy that he almost falls when he tries to stand. Afterwards, Martinez tells Philip that he's got a surprise for him. On the roof of one of the RVs, Martinez shows Philip a golf bag full of clubs and begins to practice his swing, alternating with slugs from a liquor bottle. Philip remarks that he knew that Shumpert didn't survive and Martinez reveals that after they left, Shumpert got reckless and was bitten near one of the walker pits. He finishes by saying that he personally killed Shumpert out of mercy. He says that he's willing to share leadership responsibilities and offers to split them with Philip. Martinez comments that Philip's new family brought him back. He continues that he couldn't do it for fear of knowing that he'd lose them again. To Martinez's back, Philip replies "I'm not gonna lose them." to which Martinez gives a dismissive "Yeah." Martinez offers to "share the crown a little", referring to the leadership responsibilities of the group. Without warning, Philip smashes one of the golf clubs against the back of Martinez's head, then rolls him off the roof. Philip then drags Martinez over to one of the pits and is lowered towards the walkers, muttering "I don't want it." repeatedly. He then lowers Martinez close enough to the walkers and watches as they drag a screaming Martinez down and devour him alive.

Soon afterwards, Philip is seen crying and shaking inside his trailer as Lilly and Meghan come home. When she asks, he dismisses it as a bad dream. The next day, Mitch reveals to the rest of the camp that Martinez's remains were found and that he must have gotten drunk and fell into the pit. Pete then appoints himself as temporary leader of the group until they can properly vote on the matter in a few days.

Pete then takes Mitch and Philip on another run. They come across another camp where they disagree on whether to attack the camp or not, but ultimately decide to leave. Later, they return to find the other camp in ruins with the inhabitants dead. Mitch is frustrated that they missed their chance to get the supplies, something that Philip secretly agrees with. That night, Philip tells Lilly that they have to leave the due to Mitch's inability to keep the camp safe. Philip, Lilly, Meghan, Tara and Alisha drive away from the camp to set out on their own but turn around when their path is blocked by a swarm of walkers stuck in mud.

The next day, Philip goes to Pete under the ruse of wanting to talk about Mitch. Once inside, he then stabs Pete in the back and strangles him to death. Philip goes to Mitch and forces his way inside the trailer at gunpoint. He then blatantly reveals that he killed Pete, but forces Mitch to sit back down. He then tells Mitch that he's now in charge and agrees that they should have taken the other group's supplies. Philip explains how the "hero" doesn't always have the ability to make the right decisions for the group.

Philip then organizes the survivors to form a rough perimeter around the camp and asks Tara to organize and catalog all their ammo. Later Philip drags Pete's corpse along a dock and rolls it into the lake.

Philip is seen marking a map when Lilly comes by. When asked, Philip says that they need to move to a more secure location, hinting towards the prison, but Lilly believes that their current location is safe enough. Later, Tara is on guard duty when Meghan runs up and tags her, saying that she's now 'it'. Tara says that she can't play right now, but then tags her back and runs off. Meghan runs around camp looking for Tara and finds a pair of legs standing behind the bed sheets on the clothes lines. Thinking it's Tara, Meghan runs over only to find a walker who lunges towards her. She runs away and tries to crawl under a trailer, but the walker grasps for her legs. Tara tries to pull the walker off, but the flesh strips from his leg and she's unable to get a good grip. It is only stopped when Philip shoots it in the head.

Philip goes over to the lake and reflects on what he should do next. He stares into the water at Pete's undead corpse trying to reach him, but unable due to the weights chaining him down. He takes a truck and travels towards the prison. He arrives and looks at Rick and Carl digging in the prison yard (end of "Internment"). Jealous, Philip looks away and notices Hershel as well as Michonne disposing the dead from the recent walker infestation. Seeing Michonne angers Philip (bringing back memories of her killing Penny) and he aims his gun at Michonne. 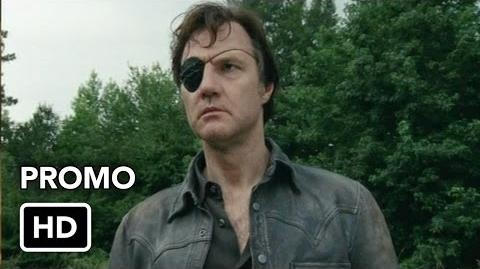