Debra Svitil is an extra who portrayed a survivor living at the prison.

According to the actress, she was only brought in for one scene to cough up blood, to show the severity of the flu in Cell Block A. She was not featured in any other scene or episode besides "Isolation", indicating that her character would have been considered as one of the flu causalities, similar to prison extras Evelyn Elliott, Harley Shellhammer, and Bill Vella. 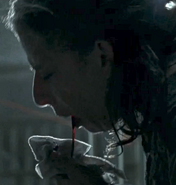 Retrieved from "https://walkingdead.fandom.com/wiki/Debra_Svitil?oldid=1235457"
Community content is available under CC-BY-SA unless otherwise noted.