Judy, Andrew's second and current wife, walks down the street back to their house with a bag of groceries. As she walks by, she can hear an emergency broadcast coming from an abandoned car. She cautiously walks past it and notices a woman lying unconscious on the road beside it. She rushes to the aid of the woman and checks her vitals. Finding none, she begins to perform CPR on the woman just as she begins to reanimate as a walker. As Judy performs the mouth to mouth resuscitation, the walker bites off Judy's lips, and she begins bleeding profusely. Andrew is heard unloading a shotgun round and then rushing back into his house to wash the blood off of his hands. The power suddenly goes out, and Andrew begins to hear noises. He goes to investigate and finds the front door open along with a bloody trail leading towards the living room. While searching, Judy appears behind Andrew and he shoots her in the abdomen. She falls down, and Andrew breaks down crying. Later, he begins to roll up her body in a rug. 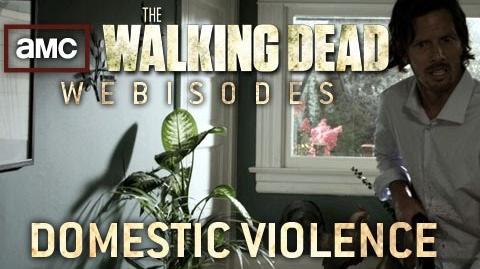