Around 3-4 years after the events of "From The Gallows", Clementine has already found AJ. The two are scavenging along the roads in a car. After exploring by an abandoned Railway Station Clementine accidentally trips a trap that alerts a large group of walkers outside. In a rush to flee Clemetine crashes the car causing her to pass out. She awakens to find that AJ and her had been rescued by a group of teenagers living in a nearby Boarding School led by a young man named Marlon.

Some time after the events of "From The Gallows", it is revealed that Clementine has found Alvin Jr. and that they are traveling together, supposedly for a while. Clementine and Alvin Jr. are low on supplies, and have not eaten or had fresh water for days. In the car, Alvin Jr. plays with his gun, to which Clementine tells him that it is getting on her nerves. When he complains about his hunger, she can gives him a magazine to practice his reading instead but it only reminds him of his hunger. She teases him with a Disco Broccoli doll but that doesn't work either so she gives him a bag of chips.

Later, the duo stop at a train station surrounded by rubble and derailed boxcars. Clementine hands Alvin Jr. a knife, and they both exit their car. Clementine takes a crowbar and canteen from the trunk. She alerts a walker, by either walking up to it, or by ringing a bell at the gate, and dispatches it with a knife. (Determinant) Clementine then pries open the door to the train station, and quizzes Alvin Jr. on what to do when entering a new place, reminding him of their rules.

Once they enter, they discover a walker couple tied to each other, sat on two chairs. AJ notices a locked security door, and Clementine peers through the ticket booth, seeing cans of food inside. She then looks at the walker couple and attempts to retrieve the keys to the door from them, but backs out, deeming it too risky. She notices a bottle of poison on the ground next to the walkers, along with a note saying to leave them alone. Alvin Jr. insists on killing the walkers to get the door keys, but Clementine wants to respect their wishes to let them be, and considers having AJ crawl into the ticket booth instead. Clementine then has to choose:

Alvin Jr. finds bullets for his revolver, and Clementine reminds him of when and how to use the gun. They find and open a concealed trap door, finding a large stash of food inside. However, moments later, a grenade rolls out, the door having been jerry rigged to trigger it on opening. Clementine slams the door shut and dives down with Alvin Jr. to avoid the blast. She then notices a large group of walkers approaching the station. They fight there way to and in the car, however, a walker prevents her from closing the door; unable to reach for her knife, she attempts to kill it with the car keys, but ends up getting them lodged in it's eye socket. As walkers begin to break through the car windows, Alvin Jr. assists her in fighting them off, while she releases the brakes. The car slams into a tree, pinning the walker with the car keys to it.

Clementine smashes the windshield by kicking it, retrieves the keys from the walker, and starts the engine. She reverses the car out of the tree, then switches into first gear. A walker attacks her while the car hurtles down a hill. Alvin Jr. attempts to shoot the walker, but the car crashes into a boulder, causing it to flip several times, resulting in Clementine losing consciousness. She temporarily regains consciousness, and sees a male figure killing nearby walkers with a bow and arrow. The man pulls Alvin Jr. out of the wreckage. She calls out for him to stop before losing consciousness once again.

Clementine wakes up in a bed, with her forehead wrapped in  bandages, and her left hand taped to the side of the bed. She breaks free from her restraint, but finds the door out to be locked. She takes a palette knife from a closet, pries open the door using the palette knife, and leaves the room. As she traverses down a hallway, she sees a door creak open, and she darts for cover behind a display cabinet. A boy checks the room she was in, and Clementine reveals herself to him, either peacefully, or by threatening him verbally or physically. A man aims at her with a compound bow, asking her to drop her knife, saying that they have Alvin Jr. After she reluctantly drops it, he explains that he was the one who rescued her and Alvin Jr. from their wrecked car, and that he locked the door and taped her hand in case she reanimated. He then introduces himself as Marlon and the boy as Tennessee. Clementine introduces herself, and Marlon leads her out of the building to see Alvin Jr.

Marlon asks her how long she has been out traveling, and tells her that the car was damaged beyond repair. While other children turn to look at the newcomer, he formally introduces himself to Clementine as the leader of the school. He then tells her to look for a Louis, and follow his music in order to find Alvin Jr. as he walks away to fend off what he assumes is a minor walker attack.

While Clementine walks down a hallway towards the source of the music, a girl, named Ruby, storms out of a room, claiming that Alvin Jr. bit her. Clementine can act defensive of him, or apologize on his behalf. The girl walks away, and Clementine enters the room. Alvin Jr. notices her, and they embrace. She then questions him on him biting the girl, and Louis informs her that he managed to calm him down by playing piano music. He introduces himself to Clementine, and she does the same. Louis then reveals that Marlon placed her belongings nearby, and she retrieves them. She takes her knife and hat, but when she gives Alvin Jr's revolver back to him, Louis questions his ability to use the gun, and Clementine's responsibility. She reassures him, and he goes back to playing the piano. She asks him if he knows any other songs; he replies that he does, and plays "Clementine". She can let Louis play, or make him stop. He then invites Alvin Jr. to press keys on the piano, which Clementine can object to.

Marlon returns,  saying that the walker situation has escalated, and requests that Clementine and Louis help deal with them. After exiting the building, Marlon explains that a hunting party is returning to the school, and that a larger-than-normal group of walkers is stopping them from returning safely, to which another school member, named Violet, sarcastically states that the car crash attracted these walkers to the area. Clem can say that haven't meet, say she's sorry or ask her if she has a problem. Louis intervenes and introduces Clem to Violet. Willy tells them that walkers are getting closer. 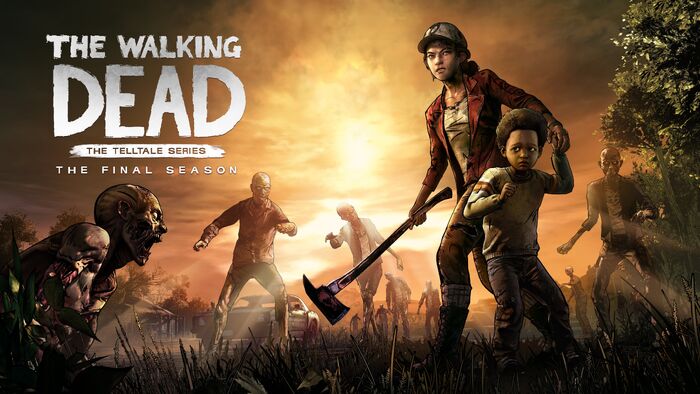 Official Trailer
Add a photo to this gallery

The First Fifteen Minutes
Add a photo to this gallery

End Of The Road -

To Make It Look Nice -

Retrieved from "https://walkingdead.fandom.com/wiki/Done_Running?oldid=1212165"
Community content is available under CC-BY-SA unless otherwise noted.