Duke Jackson is an actor who portrayed a Terminus resident in Season 5, Aphid in Season 6 and a Savior in Season 6, Season 7 and Season 8 of AMC's The Walking Dead. 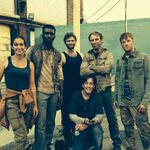 "No Sanctuary" (Behind the Scenes)

"The Day Will Come When You Won't Be"

Retrieved from "https://walkingdead.fandom.com/wiki/Duke_Jackson?oldid=1303029"
Community content is available under CC-BY-SA unless otherwise noted.