"Everything Dies" is the sixth and final episode of The Walking Dead Webisodes: Torn Apart. It is the last episode of the web series overall. It premiered on October 3, 2011. It was written by John Esposito and directed by Greg Nicotero.

Hannah is seen embracing and comforting her children while her ex-husband Andrew gathers the last of the supplies for the trip to Atlanta. Jamie mentions that the neighbor Mike Palmer has a pick-up truck outside, and Hannah asks if Andrew knows how to hot-wire the truck. Andrew remembers that Palmer kept the keys in the basement of his house and decides to look for them. He enters his former neighbor's basement again with a flashlight, looking for the keys and stumbles across a bloody trail leading to Palmer's corpse. He gets the keys off of him and turns around to find Palmer's two Walker children behind him. The undead children kill Andrew and begin devouring him. Outside, a helicopter flies above ordering any remaining survivors to head to the park where they will be evacuated to Atlanta. Hannah, beginning to suspect that Andrew is not coming back, gets her children ready to leave, grabs the guns and supplies, and heads out the front door. While avoiding the walkers on the street, they run down the block and pass an abandoned car. Hannah tells her children to stop and wait as she checks to see if the car is usable. She finds the keys inside but does not see the walker in the back seat. It bites Hannah's arm as she screams and shoots the zombie in the head. The walkers hear the gunshot and make their way towards the group. Realizing that it is too late for her, she comforts her children and hands a gun to Jamie and tells them to head for the park where they are evacuating.

Jamie comforts her brother Billy and tells him, "It's okay, baby boy, everything dies. It's God's plan." With several walkers, Callaway among the herd, approaching them, Hannah tells her children to go and is then eaten by the walkers. They tear at her torso and eat away at her legs, and the screen fades out. It then shows Hannah zombified and slowly decaying away, heading towards the park where she will eventually meet Rick Grimes. 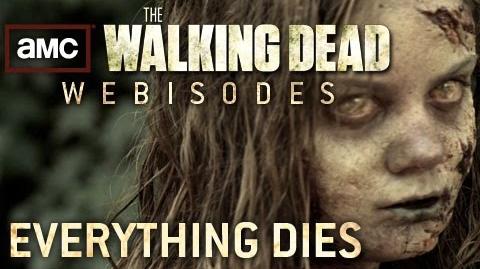