"** In the event that you chose to ignore this EVACUATION NOTICE you will be doing so AT YOUR OWN RISK. To yourself and those family members who remain with you. FRS WILL NOT BE RESPONSIBLE for rescuing person who choose to avoid this notice."
—FRS Warning on on the Mandatory Evacuation Notice seen on the bulletin board in 400 Days

The Federal Rescue Services (also known as the F.R.S.) is a U.S. government organization in Telltale Games' The Walking Dead. The organization's primary job is to oversee the safety of the public and is responsible for protecting millions of Americans from terrifying consequences of natural and manmade disasters and is responsible for responding to disasters and assisting in the recovery. The most recent disaster they are attempting to assist in, known as the "zombie"/walker epidemic, has appeared to overwhelm them, as no non-infected officials from the organization can be found. Only abandoned evacuation centers and equipment, advertisement over the radio, and some supplies, as well as some Infected FRS operatives can be seen and heard throughout the video game.

The organization functioned normally, providing aid around the United States to those who needed it whether natural or manmade disasters. It wasn't until signs of the infection began showing and more and more infected and walkers became present that FRS began working alongside with the CDC, Military, and the government trying to coordinate their efforts to save the public and begin evacuations and keep other areas under quarantine.

With the infected beginning to outnumber the normal humans in the country and evacuations failing, FRS began the emergency broadcast system informing people to head towards the cities (such as Atlanta) since the military could protect them. They also provided a damage catastrophic scale of how bad certain cities were. Eventually, FRS officials became walkers themselves and the military failed to protect the cities, leaving the public to fend for themselves.

Near the end of this episode, Lee and the group of survivors are seen at the Travelier Motel while Glenn has his car radio on, they listen as the FRS describes the conditions of the cities. The FRS reported on the State of Georgia and the current city disaster levels as follows:

The last part of this episode displayed the efforts of the FRS on the Highway Overpass when Kenny was forced to stop the train, a FRS truck as well as signs were seen blocking the highway preventing civilians from making their way to the city of Savannah. In a nearby train station warehouse, the remaining members of the FRS are seen trying to attack Lee and Clementine before they are killed by Lee.

Throughout the city of Savannah, posters, advertisements, and signs can be seen placed by the FRS as to the situation with the outbreak. Many streets were deemed bio-hazardous by the FRS and some building complexes were restricted to enter or leave due to the threat of infection.

When the apocalypse started, the FRS posted mandatory evacuation notices in rural Georgia urging civilians to head towards the cities where the military can provide protection. Signs as well as photos of missing persons can be seen placed on the bulletin board near Gil's Pitstop.

While being transferred by Prison Bus to the Meriwether County Correctional Facility, the FRS began barricading and redirecting traffic off the main highway to help contain the outbreak. This caused heavy traffic which gridlocked the highway and made several victims vulnerable to the walkers. While Vince and the remaining inmates were trying to escape the prison bus, Danny unknowingly called out to an undead FRS employee who drew more walkers to the bus and began attacking it to get to the inmates. Vince is forced to sacrifice one of the inmates so that they can free themselves and escapes with the other inmate to Gil's Pitstop.

An FRS walker is killed by Pete when Luke picks up Clementine, and another is later seen near the truck if you save Pete. The same also happens if Nick is saved as well.

In the remastered edition, an FRS walker can be seen after the crushing of Parker's Run. There is an FRS notice informing to proceed to a designated FRS evacuation center seen pinned on the map at the memorial site in Parker's Run. 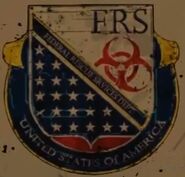 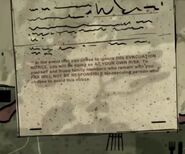 Retrieved from "https://walkingdead.fandom.com/wiki/Federal_Rescue_Services?oldid=1397763"
Community content is available under CC-BY-SA unless otherwise noted.