"Give No Shelter" is the second episode of Telltale Games' The Walking Dead: Michonne. It was released on March 29, 2016 for PC/Mac, PlayStation 4, PlayStation 3, Xbox One, Xbox 360, iOS and Android.

A daring escape from the floating colony of Monroe sees Michonne, Pete, and Sam running for their lives. An all too brief reprieve is soon shattered; the leaders of Monroe don't forgive and don't forget. With memories of her daughters bleeding ever further into Michonne's blurred reality, her world is becoming increasingly fractured... just at the point when she'll need all of her skills to survive.[1]

The opening of the episode differs on what choice Michonne made when confronted with the decision to either stop Samantha from shooting Zachary, over letting her take her revenge.

If Sam shot Zachary: The episode opens as Sam looks at Zachary's body in disbelief, having never killed another person before. As she attempts to rationalize her decision, Michonne hears someone approaching the room, and the two hide next to the door. Jonas walks in and notices Michonne and Sam. The two of them subdue him next to Zachary's body, and Jonas begins to cry out upon realizing Zachary is dead. Michonne and Sam bind Jonas' hands and gag him before continuing with their escape. Jonas is seen sobbing next to the body of Zachary.

If Michonne stopped Sam from shooting Zachary: Zachary puts away the revolver, and offers to help Michonne and Sam. Grateful and willing to make amends, Zachary offers to help them in any way he can, to which Michonne can either accept or refuse. Jonas enters the room to check on Greg, but realizes he is too late. Zachary embraces Jonas, before explaining to him what happened. Jonas and Zachary either decide to keep quiet about your escape, or join you. also wishing to leave the community. Jonas and Zachary embrace in the hallway, while Sam thanks Michonne for not letting her kill him. Michonne and Sam begin to head for the exit.

Michonne and Sam climb up the stairs and hear Randall and Norma arguing as they try to get answers from Michonne's group. After Randall and Norma leave, Michonne continues up to Pete, tied to a chair. Michonne retrieves her machete on a table beside Pete (along with a flare gun if the guard was not killed). Michonne attempts to free Pete, but he scoots away, claiming that she has no chance of making it out if Norma finds him gone. Norma appears and holds them at gunpoint, calling Randall over. Norma asks Michonne of Sam's whereabouts, the women in question climbing up to the roof of the ship. Norma, irritated, tells Randall to sound the horn and demands that Michonne drop her machete. Michonne can either comply or refuse to drop the machete (Determinant) as Sam tackles Norma from above, knocking her to the floor. Hearing the commotion, Randall runs out to see what happened, and attempts to grab him assault rifle from the boat's cabin. Michonne then chooses to either stop Randall, or subdue Norma:

Fight Norma: Michonne lunges at Norma, wrestling her pistol from her and pinning her against the railings. Sam attacks Randall, just as Norma shoves Michonne off. She slashes at her with her knife only for Michonne to knock her down. Randall appears but is surprised by Sam, the pair swiftly knocking him unconscious.

Fight Randall: Michonne goes after Randall, slashing at him were her machete only for the man to knock her down. Randall goes to shoot her but she kicks his gun away. The pair then wrestle, Michonne succeeding in smashing Randall's head against the table, subduing him. Michonne goes outside to find Sam knocking Norma unconscious.

Michonne frees Pete, who is annoyed by Michonne's insistence to use violence. Arming himself with his knife, the three continue their escape but are interrupted as Randall manages to sound the alarm. The community goes into high alert, and guards begin patrolling the area, one of which encourages the colonists to be cautious about the escaped prisoners, as they make their way through the colony. Taking refuge in a nearby boat, the three attempt to find a way out of the community. Michonne spots an unused and unguarded boat in the distance. Sam insists that they fight their way to the boat, while Pete is apprehensive to killing anyone. Pete volunteers to give himself up, stating that he can reason with the guards, giving Michonne and Sam time to escape while ensuring that no one dies. Pete goes to open the door, and Michonne can either let him go through with his plan, or stop him.

If Michonne stops Pete: Michonne pulls Pete back inside, much to his dismay, telling him that she isn't taking any chances. Noticing a nearby patrol boat with flammable oil barrels, Michonne exits the hiding spot uses the flare gun to set the barrels ablaze. Michonne tosses the flare gun aside and proceeds to fight off multiple guards while the barrels explode, causing a fire. Sam and Pete appear shocked by the carnage as they begin to swim for the boat. As Michonne and Sam board the boat, Gabby appears and holds them at gunpoint, not willing to let them escape. Pete swims up behind Gabby, and is able to knock her into the water. Pete jumps on the boat, and the three begin their escape as the fire continues to rapidly spread out of control, setting multiple different boats ablaze.

If Michonne lets Pete go: Pete walks out and surrenders, saying that he only wants to speak to Norma. Pete continues to negotiate while Michonne and Sam attempt to head to the boat. Michonne and Sam manage to reach the boat undetected, only to be found by Gabby. Sam helps distract Gabby as Michonne pulls out the flare gun and attempts to shoot her. Gabby dodges the shot and falls into the water, while the flare inadvertently starts a fire on a nearby boat. The resulting fire begins to rapidly spread throughout the community, setting multiple boats ablaze as Michonne and Sam begin their escape.

Michonne and her companion(s) drive away from Monroe as panicked residents attempt to evacuate. A guard attempts to snipe Michonne on the way out, damaging the boat's motor in the process. The boat sails off as Monroe continues to burn in the distance.

Sam continues to drive the boat, while Michonne discusses what to do next. Sam tells Michonne that they can take refuge at her father's house, who she claims can help them, which Michonne agrees to. They make it to the shoreline, as remaining residents of Monroe begin to fire off flares. A small herd of walkers emerge from the tree line, having been attracted to the flames. Michonne attempts to clear a path, but is interrupted when the remaining residents of Monroe begin to open fire on them from the distance. Michonne and the rest crawl behind cover as shots continue to hit the shoreline.

Realizing that they need to put distance between the people of Monroe, Michonne decides to push through the herd, while Sam and Pete (Determinant) question how they'll be able to do so. Noticing a piece of nearby rope, a brief flashback shows Michonne in the early days of the outbreak, slicing off the arms of walkers and putting a rope around their necks, using them as camouflage to blend in among walkers. She hacks off a walker's arm and jaw and has Samantha hold it down while she pulls apart the walker's other arm. She does the same to another walker and ties a rope around its neck, Samantha following suit. They then walk among the horde undetected. Michonne hallucinates seeing her two daughters among the herd, who disappear. As they move on, Randall and small hunting party arrive at the shore in modified airboats, and open fire. Michonne, Sam and Pete (Determinant) retreat into the woods while Randall and the hunting party deal with the herd.

As they escape their pursuers, Samantha says that there is a shortcut to her house, a collapsed radio tower which can help them reach the top of a cliff. Michonne, Pete (Determinant) and Sam climb up the radio tower, nearly falling along the way. A Monroe resident, Cam spots them and alerts Randall. Randall and his men arrive and open fire on Michonne and her companion(s). Randall unloads his assault rifle on them, but runs out of ammo shortly after, so he uses his handgun instead. Near the top, Samantha is shot in the breast, while trying to aid Michonne. Cam tries to go after them by climbing on the radio tower, but it collapses due to his added weight and crushes him. Michonne, Pete, (Determinant) and Samantha manage to make it to high ground as Randall and his men head into the woods to find another way.

Michonne and company proceeds through the woods. Pete or Michonne (Determinant) asks where the house is, Sam stating it is not far. As times passes, Sam begins to fall unconscious due to her wound, leading Michonne to have to carry her. To Be Added

Did you keep Pete with you or let him go off on his own?

Did you pick up the phone or go after the footsteps in the hallway?

Did you reveal to Paige that you nearly commited suicide?

How did you handle the radio call from Norma?

What did you do to Randall?

This list shows the narrative consequences affected by choices from the previous episode. 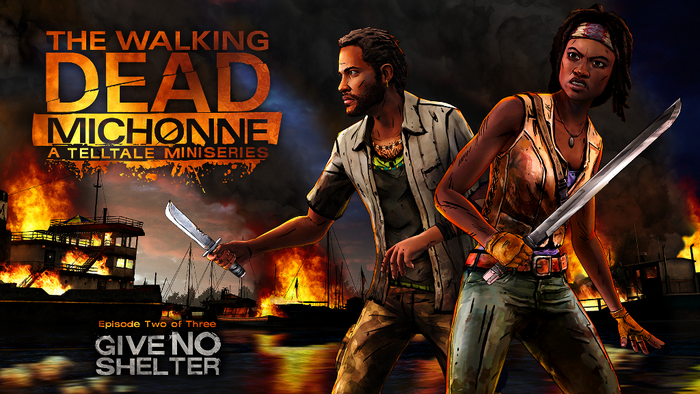 For all obtainable achievements and trophies, see Achievements.[2]

This episode received mixed reviews, lower than its predecessor. Game Informer noted that, "somehow episode two is an even bigger bore than the last one." They criticized the episode for being too predictable, saying, "predictability is prevalent within the paper-thin personalities of the characters as well." However, Game Informer praised the action sequences, saying that they "are the best that Telltale has ever produced, with slickly animated scenes of our character rolling around and slashing the undead and living to bits, with relatively few technical hang-ups."

Start a Discussion Discussions about Give No Shelter