Start a Wiki
The hatchet is a major weapon in The Walking Dead. A hatchet is a small axe use for lighter work. The handle length can vary from 14 to 20 inches. The hatchet is Rick Grimes' main weapon and is first picked up at the farm where he finds the horse. He picks up the hatchet just before mounting the horse saying, " I hope you don't mind, I thought it may come in handy". Rick has used the hatchet to kill a large amount of zombies and is his iconic trademark weapon. Rick used the hatchet while riding into Atlanta, looting guns, clearing out the prison, and saving the safezone.

Not much is know about Rick's hatchet before the apocalypse. It is known that the hatchet was used by the family who owned that farm where Rick found it.

Rick used his hatchet during his trip to Atlanta. After Rick is swarmed by a group of zombies, he drives his hatchet into the skull of an oncoming zombie. He decapitates another zombie before he is saved by Glenn. Rick uses his hatchet once again to hack up a zombie and use it for camouflage before raiding a firearms store. He uses the hatchet to hack down the store's door and to kill attacking zombies on his way back to the camp.

Rick sticks with the hatchet as his main weapon. Before arriving at The Greene Family Farm, Rick uses his hatchet to kill frozen and unfrozen zombies. Rick uses it to clear out some houses and to escape Wiltshire Estates.

Rick does not use his hatchet at The Farm. It is only seen holstered in Rick's baton holster during the farm story arc. It is used to kill zombies after leaving the farm and is holstered upon the discovery of The Prison.

Rick continues to his hatchet after The Governor's raid on The Prison. He attempts to kill a zombie in a convenience store but fails to drive the blade deep enough into the skull. Carl ends up shooting the zombie to safe his father. Rick doesn't use his hatchet until after leaving The Farm.

After the two year time skip, Rick has taken on the appearance of a younger Douglas Monroe. Rick now walks with a cane and uses a prosthetic hand. Rick doesn't leave Alexandria too much but heads to The Hilltop with Carl when Carl decides to be Earl Sutton's apprentice. While on the road, Rick encounters a few zombies. Rick pulls out his hatchet and kills the zombies, but is almost killed due to his injuries and being unacclimatized to the outside world.

Rick obtains a Cold Steel Axe Gang Hatchet at Jessie's House when the Alexandria Safe Zone's wall falls. Rick uses his hatchet to clear walkers out of the safe zone during No Way Out. Rick continues to use his hatchet when finding a walker head to pose as a dead Gregory. Rick's hatchet is used on Last Day On Earth to clear the walker road block. The hatchet is confiscated by the Saviors when Rick and the group are ambushed. Then given back to him in season 7. Rick is using his hatchet later on in Season 8 & 9 by killing walkers and occasionally a few humans. It is unknown what happened to this hatchet after Rick's "death". 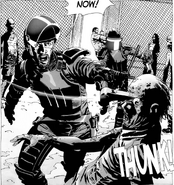 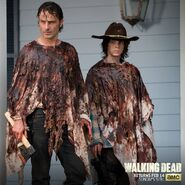 Add a photo to this gallery
Retrieved from "https://walkingdead.fandom.com/wiki/Hatchet?oldid=1309631"
Community content is available under CC-BY-SA unless otherwise noted.