While on a supplies mission to a local college, members of the group run into multiple hurdles. Things at the prison are getting worse.

Carol tells Lizzie that she is going on a supply run with Rick. During the conversation, Lizzie tells Carol that no one dies, yet. "Yet?" Carol asks. Lizzie then explains what she will be if she survives, "I'll be me, but I'll be different." Carol offers reassurance and reminds her that if something happens, she should run "until it's safe". She also says that both of them, along with Mika, will survive. Carol tells Lizzie to put her t-shirt behind her knife so she can get to it quickly. While this is happening, Lizzie responds "yes mom." Carol tells her not to call her mom probably because she lost her daughter and felt like she failed her.

Meanwhile, Rick investigates the room where Karen was quarantined before being killed. Rick imagines Carol stabbing Karen in the neck, and dragging her body down the hallway to be burned. Afterwards, Rick is seen getting ready for the supply run, along with Carol.

The supply group is at a stream, discussing what they should do to secure a vehicle. Tyreese is washing his shirt in the water, noticeably absent from the conversation. Michonne mentions that they aren't far from Barnesville, and Daryl suggests that they go, as they will have a better chance of finding a vehicle there. He tells Tyreese that they are moving out, but he is ignored.

Daryl and Michonne leave, but Bob stops and encourages Tyreese to come with them. He only responds by angrily lamenting that he doesn't know if his sister or "anyone else" is still alive. Bob says that regardless, it helps to keep moving. Tyreese disagrees, but stands up and starts walking.

In the car, Carol mentions to Rick that Maggie wanted to come with them, Rick says that they needed someone to stay behind and stand watch. Carol replies with "Someone you trust, you mean." She goes on justify her murder of Karen and David, saying that by doing so, she alleviated their suffering. Additionally, she hoped to prevent anyone else from getting sick.

The supply group continues their search, and finds an auto shop. After clearing some heavy vine growth, they find a minivan, which just needs a battery. As the group chops away at the overgrowth, Tyreese continues to grieve over Karen's death. He begins violently chopping at the overgrowth, which causes a door to pull open. Several walkers emerge, and the group struggles to dispatch them. Tyreese grabs a walker that is stuck in the vines, and refuses to let go. He eventually pulls it out, but the momentum causes him to fall backwards with the walker on top of him. Bob shoots it in the head before it can do any damage.

Carol and Rick begin searching a house, and find several useful items. A walker comes out of a bedroom on the second floor, and starts walking toward them. However, it is unable to negotiate the stairs and tumbles down, almost landing on top of Carol. Rick pulls her away at the last second, after which she stabs the walker in the head.

They start hearing noises coming from upstairs, like someone is moving around. Rick points his gun in the direction of the noise, after which a woman and man (Sam and Ana) emerge from their hiding place in an upstairs bedroom. They introduce one another, and Sam explains his dislocated shoulder. Carol fixes his dislocated shoulder. Rick asks them where they came from, and where they plan to go, followed by the three questions.

Sam asks if they passed his test, but Rick doesn't answer. Instead, he suggests that they should wait in the house until he and Carol finish searching. Then after dark, they will circle around and come back to retrieve them. Rick gives Sam a watch, and says they will regroup in two hours. Carol disagrees, reasoning that Sam and Ana could help to widen the search grid (even though Ana's leg is injured, and Sam's shoulder has just been realigned).

While scavenging the veterinary college for medical supplies, Daryl and his supply-group are ambushed by walkers. It appears that all of them died from the same flu-like disease that has swept the prison. Tyreese helps the group escape by throwing a fire extinguisher through the window and they all jump onto the roof of an outside walkway. Bob nearly loses his bag when it drops over the edge, but he manages to hold on to it. Daryl, however, finds that there is nothing in his bag but a bottle of liquor, which he attempts to throw away. Bob puts his hand on his holster, demanding Daryl not throw the bottle away. Daryl takes swift action, disarming Bob and grabbing on to him. Tyreese breaks them up, saying that Bob has already made his choice. Daryl says that they should have never allowed Bob into the prison group, and that he will beat him into the ground if he drinks even a sip of liquor before the ailing prisoners get the medicine.

Rick and Carol then go to search other houses before going out to the yard to harvest some tomatoes, having a short conversation while doing so. As they continue to move, they suddenly find a basket with dropped food, and then find Ana's severed leg. In the distance, they see what is left of Ana being consumed by two walkers.

Rick gives Carol her supplies, food, and a vehicle, before banishing her from the group, believing that nobody will trust her (including himself), once they find out that she killed Karen and David, not to mention that Tyreese would try to kill Carol himself. Carol hands him a watch that Ed gave her on her anniversary to replace the one that he gave to Sam, before driving away. 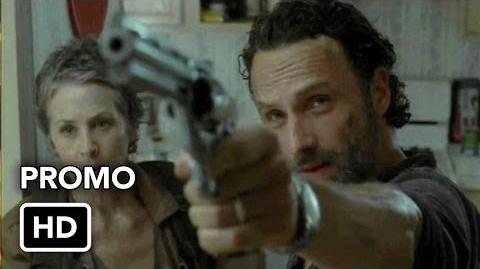