"Internment" is the fifth episode of the fourth season of AMC's The Walking Dead. It is the fortieth episode of the series overall. It premiered on November 10, 2013. It was written by Channing Powell and directed by David Boyd.

Multiple enemies put pressure on Rick and the group. Could this finally be the breaking point for the survivors and the prison?

Rick arrives back at the prison, and meets Maggie who is busy clearing walkers from the fence. Rick asks about Carl, but Maggie questions him on Carol's whereabouts. He tries to avoid the subject by asking another question, but she demands to know what happened. Rick breaks down, and tells her about Carol's dismissal from the group. He asks Maggie if she would have made the same decision, and she answers in the affirmative. However, she doubts that she could have committed to it. Before they part, Rick tells her to trust her instincts. He then heads to the administration building and slides a bag of food to Carl, avoiding close contact.

Inside A Block, things continue to worsen as more members get sick. Henry cannot breathe, so Hershel decides to intubate him, which allows him to be manually ventilated with an air bag. Sasha and Glenn take shifts pumping air into Henry's lungs, beginning with Sasha. Glenn and Hershel find Mr. Jacobson dead, with blood covering his face from his nose and mouth. Glenn reaches for his knife, intending to stab him in the head so he won't reanimate. However, Hershel stops him and says not to do it in front of everyone. Instead, they load him onto a gurney so he can be transported to a more isolated location. As Mr. Jacobson begins to reanimate, Hershel finds that he is unable to put him down. Glenn steps in and finishes the job.

Later, Maggie comes to visit Glenn through the security window. Hershel stops her and says that he is resting, presumably because he doesn't want Maggie to see Glenn in his current state. Glenn is revealed to be just out of sight from the window, and he thanks Hershel for not allowing Maggie to enter the quarantine.

Hershel begins closing everyone's cell doors, on the advice of Dr. S. A man storms out of his cell, and appears to be suffocating from the blood in his lungs. An extremely weak Sasha helps Hershel put him on a bed with wheels before she gets too weak to help him. He warns her to return to her cell, and brings the body to a separate room. Hershel prepares to stab to him in the head, but can't bring himself to do it. Instead, he puts a sheet over the man's face. Rick witnesses Hershel stab the man in the face and tells him of Carol.

Hershel returns to the cell block, he continues closing the doors. However, upon seeing a collapsed Sasha, he runs to her, leaving a cell with a female walker wide open. Hershel notices that Sasha has passed out due to dehydration, and successfully revives her. She tells him of how she used to calculate everything so she could live as long as possible, and expresses gratitude for his "stupid" behavior.

Hershel resumes closing the cell doors, and notices that Noris and his son are passed out in the same cell. Noris insists on staying at his son's bedside, and locks the cell door behind him. Soon after, Glenn was pumping air for Henry, but he dies. When Glenn attempts to call out for help, he starts choking on his own blood and passes out. Lizzie finds him just as he is about to reanimate. Lizzie calls for help, which gets the attention of the female walker behind Hershel. The female walker jumps on Hershel and pins him against the floor. The father leaves his cell with a gun and his reanimated son follows him. A blonde woman comes to his rescue and pulls the walker off of Hershel, saving his life. However, the son attacks his father from behind, causing him to accidentally fire a gunshot that kills the woman. The gunshot echoes through the prison to Maggie and Rick who are fortifying the fence. Rick warns her to go help the people in Cell Block A.

Meanwhile, Lizzie leads the walker away from Glenn as Maggie arrives and attempts to open the door without success. Hershel gets up and runs toward Lizzie, who gets pinned by the walker. He manages to throw the walker off of the catwalk. He sticks Lizzie in Luke's cell and he goes to get the shotgun from Caleb, however he has already turned. Caleb grabs Hershel as the female walker starts to move up the stairs. With sadness, Hershel breaks one of Caleb's arms and kills him. He proceeds to kill three walkers after leading them out of the children's sight. He realizes he needs the air pump to help Glenn and climbs onto the metal cage that the walker had landed on, but ends up getting pinned. Maggie heads to the visitors room and smashes a window to get into A Block. She kills the reanimated father and the walker pinning Hershel and the two head to help Glenn who has stopped breathing.

Outside, the fence gives way and a horde of walkers get in. Rick and Carl run into the courtyard, where they get assault rifles and gun down the many walkers. Right after they finish, the van with Daryl, Michonne, Tyreese, and Bob finally returns. Daryl and Michonne run out of the van to go help, while Bob and Tyreese head to A Block. Tyreese goes and cradles Sasha in his arms, while Bob goes to administer medication to Glenn.

The next morning, Rick returns to his usual routine, splashing water on his face. He is about to go talk to Daryl when Carl comes along. Rick instead decides to spend time with Carl harvesting the garden. Hershel helps Michonne and Daryl load up the dead bodies. Daryl asks where Carol is, and Hershel avoids the question by telling him that she is fine but to talk to Rick about her. Michonne extends an offer to Hershel to join her, and he accepts.

Outside, the Governor is seen observing the prison from a distance. 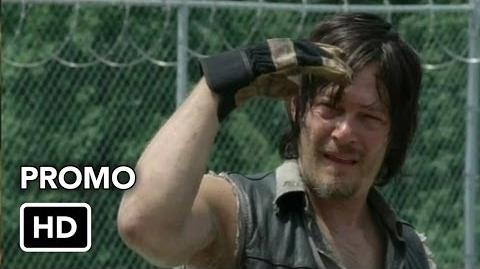