Issue 1's Events on the Map

The story opens with Officer Rick Grimes and his partner, Shane, in a standoff with Reggie who has escaped from prison. Rick tells Shane to cover him while he flanks Reggie. The escaped con, however, manages to shoot Shane's gun out of his hand, then proceeds to shoot Rick.

It immediately cuts to Rick in a hospital bed waking up. He tries to get up but falls to the floor. He yells for a nurse, but no one comes. After waiting for several minutes, he gets up on his own and gets dressed. He explores the hospital, but finds it deserted. After riding in an elevator to another floor, he is startled when the door opens and a corpse falls into the elevator. Once again, he yells for help, but no one answers. He discovers the cafeteria door blocked with a board and decides to investigate. Once he opens it, he finds the room full of zombies. He is attacked, but is able to get away unscratched after tumbling down the stairs. He attempts to find some means of transportation but only finds a bicycle which is guarded by a half-eaten zombie. After stumbling back in disgust Rick grabs the bicycle and pushes it down the road. Overwhelmed, he falls to his knees and briefly cries before getting up and riding the rest of the way. When he arrives at his house he finds it ransacked and deserted. Upon exiting, he is hit over the head with a shovel by Duane Jones, and knocked unconscious. Duane's father, Morgan, comes running up and scolds the young boy, telling him that Rick is alive and not a zombie.

Rick wakes up in the Jones' residence and, and is invited to have dinner with Morgan and Duane. Rick is confused and starts to panic, but Morgan calms him down and is surprised to learn Rick is clueless about the apocalypse. Rick reveals how he was shot, put in a coma, and doesn't know what is going on. Morgan tells Rick that not much is known about what caused the outbreak, but, that the media was informing everyone to relocate to large cities so that everyone could be protected. Morgan decided to take his chances in a small town, and says the power has since gone out and he knows nothing else. Rick mentions his wife, Lori, had family in Atlanta and that she may have gone there with their son, Carl.

After talking, Rick, Morgan, and Duane go to the police station where Rick works. Morgan cautiously asks Rick if he minds him and his son taking residence at his neighbor's house, but Rick tells not to worry about it. Rick thanks Morgan for driving him to the station, and takes him to the armory. He leaves him to choose weapons while Rick goes to change into a police uniform. Rick equips himself with guns and a car. He also gives Morgan a car. Morgan proceeds to thank Rick before they are interrupted by a zombie pushing up against a chain-link fence. Rick wants to shoot it, but Morgan stops him, since the zombie can't get them and he might need that bullet later. Morgan and Duane plan on staying in the small town, so Rick and Morgan wish each other well and Rick mentions he will come back later for the two. Before Rick leaves for Atlanta, he walks over to the bicycle zombie and tearfully shoots her in the head.

Starring
Phil LaMarr as Rick Grimes, Shane, Reggie and Zombies
Motion Comic: The Walking Dead was released by AMC Digital of the first part of Issue 1 of the comic with animation by Juice Films.[2][3] It was posted on July 20, 2010.[4]

The animation is based on the first 13 1/2 pages of the original The Walking Dead comic, created and written by Robert Kirkman and art by Tony Moore. It was released previous to the first season of AMC's TV Series.

Additional credits on the project include voice acting by Phil LaMarr as Rick, Shane, Reggie and Zombies,[5] direction by Jake Strider Hughes of Juice Films,[6] and original music score by Lennie Moore.[7][8] 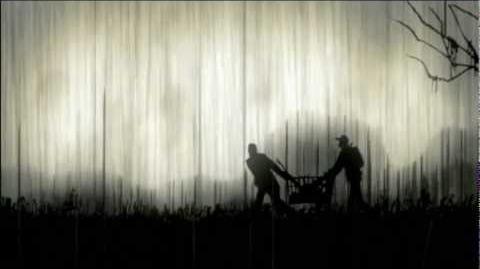