James Frazier is the founder of The Walker Stalkers website and podcast with Eric Nordhoff and Walker Stalker Con. Frazier started out as an attorney in Brentwood, Tennessee. He is now the sole owner of Walker Stalker Con, which produces over 10 conventions a year, centered on zombies, horror and sci-fi, with guests from The Walking Dead as the focus of the events.

James Frazier, far left, as a walker in the Season 5 Episode, "Spend"

James Frazier as a walker in the Season 5 Episode, "Spend" 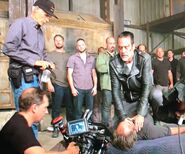 James Frazier as a Savior on the set of The Walking Dead.
Add a photo to this gallery

Retrieved from "https://walkingdead.fandom.com/wiki/James_Frazier?oldid=1382106"
Community content is available under CC-BY-SA unless otherwise noted.