Rick sides with Shane on an important decision, causing Dale to worry that the group is losing its humanity. Carl's actions have unintended consequences on the group.

In the farm's slaughter shed, Daryl interrogates and beats a bound Randall. Randall confesses that he was traveling with a heavily-armed group of 30. The men, he says, have raped women before. Still, Randall insists, "I ain't like that."

Daryl reports back to the rest of the group. Rick declares Randall a threat, and that he must be killed, "You can't just decide on your own to take someone's life," Dale objects, begging Rick to give him time to talk to the group and find another way. Rick agrees to give Dale the rest of the day.

Dale asks Andrea to guard Randall against Shane while he talks to the others. He asks if Andrea agrees that Randall should be killed. "The world we knew is gone," Dale argues, "but keeping our humanity? That's a choice." Andrea agrees to watch Randall — "But not because I think you're right," she says.

From inside the slaughter shed, Randall overhears Shane approaching with Carl. Carl is curious about the prisoner, but Shane insists he let the grown-ups handle it.

Shane asks Andrea, who's standing guard outside, if she would stop him if he were to try to shoot Randall. She insists she would. Shane shares his suspicion that Rick won't be able to go through with the execution. "Every time we have a problem around here," he says, "who you think's behind it?"

Meanwhile, Carl watches Randall from the rafters of the slaughter shed. Randall notices him. "I didn't do nothin'," Randall tells Carl, begging to be set free. Carl slowly starts walking toward Randall, but is halted when Shane enters.

Shane shoves a gun in Randall's face and drags Carl out of the shed. "Quit tryin' to get yourself killed," Shane scolds.

Dale approaches Daryl about Randall. "This group's broken," Daryl says, stating he doesn't care what happens either way. Dale asks Daryl to stand with him anyway, but Daryl won't.

Lori finds Rick tying a noose in the barn. He asks if she supports his decision. "If you think it's best," she says, asking about what happened on the road with Shane. "He won't be a problem anymore," Rick answers.

Carl is kneeling by Sophia's grave when Carol approaches. They'll see Sophia in heaven, she tells him. Carl snaps back that "heaven is just another lie, and if you believe it, you're an idiot."

Dale goes to Hershel, asking for his support. "I don't want to know," Hershel insists. "I leave it with Rick."

Carl wanders into Daryl's camp and finds a handgun stashed in Daryl's motorcycle saddle bag. He pockets it, and heads into the forest. Carl stumbles upon a walker stuck in the mud of a creek bed. Fascinated, he begins throwing rocks at the walker, then approaches to shoot it with Daryl's gun. The walker lunges at Carl, eventually freeing itself from the mud and grabbing on to Carl's leg. Carl falls to the ground, but manages to get away.

Dale, meanwhile, tries to convince Shane to spare Randall. Shane gives Dale credit for the effort, and says that if Dale convinces the others, he'll go along with it. "But I'm telling you now," Shane warns, "you're wrong."

In the farmhouse, Glenn finds Hershel checking up on Beth. Hershel asks Glenn about his family and tells him about his own Irish heritage. He hands Glenn a pocket watch that belonged to his grandfather. "No man is good enough for your little girl," Hershel says, "until one is."

As the sun sets, Rick again asks Lori if she thinks he's doing the right thing. Lori nods. The group gathers in the house. Rick asks if anyone thinks Randall should be spared. Dale posits that the only people who think so are himself and Glenn, but Glenn too sides with Rick. "He's not one of us," Glenn offers.

Dale begs to give Randall a chance to prove himself, but the others insist they wouldn't feel safe with him around camp. "If we do this," Dale says, "We're saying there's no hope."

Dale pleads with the group to do what's right. Andrea eventually sides with him, but the others stay silent. Despondent, Dale leaves the room. "This group is broken," he says, echoing Daryl. Afterward, Rick, Shane, and Daryl bring Randall to the barn and put him on his knees. Rick asks if he has any final words. Randall cries, begging for his life. As Rick raises his gun, Carl enters the barn. "Do it, Dad," he says. Shocked, Rick lowers his gun and orders Randall taken away. Shane storms out of the barn.

Rick brings Carl back to the camp and tells Lori what happened. "He wanted to watch," Rick says. "I couldn't." Meanwhile, Dale walks through the fields. He hears the moans of a dying cow and goes to investigate; the cow had been gutted. He turns and is attacked by the same walker that Carl found in the creek bed. Back at camp, the others hear Dale's screams. Daryl runs to the scene, where the walker is on top of Dale, tearing into his stomach. Daryl stabs the walker in the head, then shouts for help. Dale is severely injured, his intestines have been exposed. He goes into shock. Rick and the group arrive at Dale's side and are devastated at Dale's injuries. When Hershel arrives, he reports that Dale can't be saved. As Dale writhes on the ground, Carl sees the body of the walker he was throwing rocks at previously lying nearby. Horrified, he buries his head in Lori's lap. Andrea begs Rick to help Dale. Rick unholsters his gun, but can't shoot. Daryl takes the weapon and aims it at Dale's head. Dale gives him a faint reassuring smile, giving him permission to end his torment. "Sorry, brother," Daryl says sadly and fires.[1] 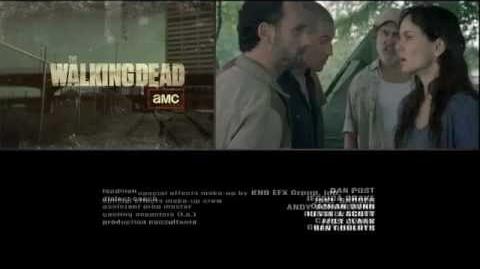