"I lost my wife, when all this started. I was bad to her when she was alive. I always regretted that. Losing her made me...numb. That kept me alive. Then I found a bat, and it kept me alive. To me, it represented...her. I named it after her...Lucille. Laying it to rest here...was like I was laying her to rest."
—Negan to Derick about burying his baseball bat.[src]

Lucille is a wooden baseball bat covered in barbed wire first encountered in Issue 100 of Image Comics' The Walking Dead. Originally owned by Paul, but after his death, it is used by Negan to kill both humans and zombies alike. After Negan's fall in Issue 126, Dwight became the new possessor of Lucille.

It is unknown who originally owned Lucille before the apocalypse, but when Negan comes into contact with a few survivors in Here's Negan, Paul is the first one to have owned "her", until he is killed by zombies and Negan keeps it. He was the one to wrap the barbed wire around the bat. "She" was named after his deceased wife, who passed away from cancer.

Lucille first appears in Issue 100 with Negan, as the Saviors ambush Rick's group. She is introduced to Rick and his group when she is used to brutally beat and kill Glenn as revenge for the loss of many Saviors. In Issue 113, Carl shoots Lucille and an enraged Negan demands the Alexandria-Safe Zone survivors throw Carl over the wall. The survivors refuse Negan's demands and he states that if they don't throw Carl over he will use Lucille to kill Rick, Heath, Nicholas, and Holly. This never happens, though Negan does get to utilize Lucille in the war, killing many soldiers and zombies. In Issue 122, Negan brings out a new and improved Lucille that is covered in zombie guts, so that when hit, survivors will get exposed to harmful pathogens that will lead to a deadly infection.

After Negan is defeated, Dwight takes Lucille and holds onto it.

When Dwight decides to leave the Sanctuary and end his leadership, he takes Lucille with him and brings it to Alexandria. Ultimately, he carries it on his person during the Whisperer War.

During the whisperer war Dwight gives Lucille back to Negan to help him kill Beta. While Negan is successful in striking Beta with the bat several times, it is ultimately shattered and destroyed, possibly due to exhaustion. Negan is devastated over the destruction of Lucille. Later, Negan is seen burying the broken Lucille and paying a poignant tribute to the woman he named the bat after, his wife. He apologises for not giving her a proper burial and for naming a baseball bat after her.

The following is a list of victims killed with Lucille:

Negan wrapping the wire around Lucille 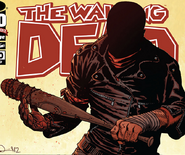 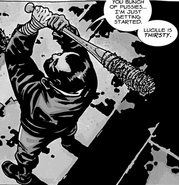 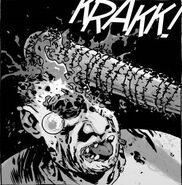