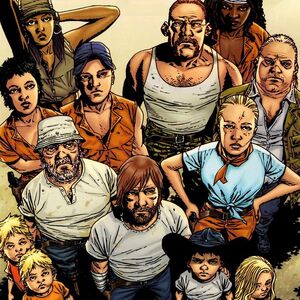 Welcome to The Walking Dead Wiki, Gboy4! Thank you for Ben Paul
There's a lot to do around here, so we hope you'll stay with us and make many more improvements.

Recent changes is a great first stop, because you can see what pages other people have been editing, and where you can help.

Questions? You can ask on the "discussion" page associated with each article, or post a message on my talk page!

Need more help? The Community Portal has an outline of the site and links to pages to help you learn how to edit.

Please sign in every time you edit, so that we can recognize an established user.

We're really happy to have you here, and look forward to working with you!

Re: Language on the wikiEdit

No, that kind of language is not allowed. Thank you for bringing it to my attention. I will speak with him. I hope you're not too put out by it.

I have left him a message. And thank you for not responding to him and potentially causing an argument. Reporting it to an administrator was the right thing to do. If you have any comments, questions, or concerns, feel free to let me know on my talk page.

hey why did you undo my edits to those characters pages?? they aren't determinant. determinant means dead or alive. the characters can be alive or unknown

1. Sign your comments. 2. Determinant means that their appearance (in regards to the episode) or status (in regards to the character) depends on the player, alive/unknown counts. 3. You should have started a new topic. Gboy4 (talk) 00:43, August 28, 2014 (UTC)

if determinant means their status can be depended on the player, then they is their a status "unknown" like why do we use the term "unknown" for statuses? if we can just put determinant

1. Sign.Your.Comments. 2. I'm not sure what you just said but if you are talking about the family then they are determinant because they are alive if you let them in but if you make them leave they are unknown. Gboy4 (talk) 00:55, August 28, 2014 (UTC)

Just to let you know, there was an old discussion about Vernon's fate. This wiki proposed that he should remain as dead. We aren't gonna change it to unknown just because it's your opinion. That's not how this wiki works. SilentGlaive even told another user that he should remain dead. She has a higher authority on here than me or you. She, alongside the other admins, makes the choices for this wiki, with the majority vote based on us non-admin users. Let it go, and nothing can happen, or possibly get into trouble that could've easily been avoided, and possibly face some time of being banned for incorrect content on the page(s). I'm not typing this to be cocky. It's to let you know for you to keep your opinion of Vernon to yourself. Make him unknown on your own profile page. NJD is awesome and no one should mess with him (talk) 11:13, December 26, 2015 (UTC)

Yet again you offer no argument, listing him as dead on incredibly vague evidence is completely illogical and rather than an actual defence you're just raving "because we said so", I'm not backing down unless you make a logical argument or I'm blocked, I bet I know which you'd prefer. --Gboy4 (talk) 11:22, December 26, 2015 (UTC)

This wiki is a community. We, as a community, makes decision to and for the wiki. You're going against a decision that was made by this wiki, this community. That means you're against the wiki. I might dislike a few of the staff members, but I don't go against a decision made by the wiki and community. If you have the balls to go against a permanent decision, then you'd have the same balls to grow the hell up. If you're an adult, then I'd feel bad for your family. I'm more mature than you. I'll leave this with a reminder. No matter what you think, you're gonna lose. NJD is awesome and no one should mess with him (talk) 11:33, December 26, 2015 (UTC)

Speak better english. I'd expect someone from England to speak better english than any person from any other country. For real, Vernon's dead, and you'll just have to accept it. If you have a problem with that, then you could simply leave this wiki if you want. We aren't forcing you to stay or leave. NJD is awesome and no one should mess with him (talk) 11:41, December 26, 2015 (UTC)

You're an illogical fool, and I'll leave you alone for you to dealing with the truth. Good luck with your theory, because it ain't true. Also, Vernon's dead, and you can't handle the truth. Why am I commenting to your bs? Bye. NJD is awesome and no one should mess with him (talk) 11:51, December 26, 2015 (UTC)

Maybe if enough people agreed with Gboy then the discussion could be reopened. There are a lot of ambiguous statuses in the Walking Dead and a lot of the time the wiki makes the best call it can, but a lot of the time there's going to be people that disagree, and if you can provide a good enough argument or have enough people thinking the same as you, then I don't see why you shouldn't speak to an admin or two on chat or on their talk and maybe convince them to make another call. RelicRaider (talk) 12:02, December 26, 2015 (UTC)

Gboy, here's a gif for you. Relic, this is not my reply to you, so don't need to worry. NJD is awesome and no one should mess with him (talk) 12:05, December 26, 2015 (UTC)
Retrieved from "https://walkingdead.fandom.com/wiki/Message_Wall:Mr_Rinn/User_talk_archive"
Community content is available under CC-BY-SA unless otherwise noted.