Monopoly: The Walking Dead Survival Edition is the classic game of Monopoly, but themed to fit the world of The Walking Dead. It is based on the Comic Series and was available on October 2, 2013.

Despite its post-apocalyptic setting, MONOPOLY: The Walking Dead Survival Edition (APR132229, $39.99) delivers classic Monopoly wheeling and dealing game play. Players vie for, and then must fortify, the prime real estate and resources that will sustain their lives. There’s only one victor that will outlast the others—whether living or undead—when all is said and done. This completely customized game features six collectible tokens, optional speed play and a fight to the finish!

The standard Monopoly pieces are given a unique spin to fit the world of Robert Kirkman's The Walking Dead. 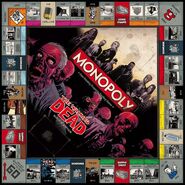 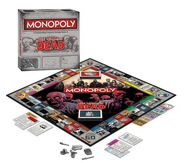 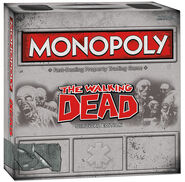 UK edition
Add a photo to this gallery

Retrieved from "https://walkingdead.fandom.com/wiki/Monopoly?oldid=1207818"
Community content is available under CC-BY-SA unless otherwise noted.