Andrew travels to his neighbor, Mike's, basement in search of guns and supplies. Once there, the two have a man-to-man conversation and finally come to an understanding with one another. Palmer asks Andrew why he needs his gun, and Andrew mentions his dog, Max, who has been infected by the walkers. Palmer tells Andrew he's got more of a problem than his dog and then reveals his wounded leg. Andrew insists that Palmer should go to a hospital, but Palmer mentions that the CDC is searching for a cure and claims that the outbreak was organized by terrorists. Palmer then tells Andrew that today is his birthday, and how his kids made him a card, and his wife baked him a cake. He tells him how he had to kill his wife, Maggie. Walkers (presumably his children) can be heard upstairs banging on the door, trying to get in and Palmer yells at them to "hold their horses" saying, "Papa will be right there." Palmer then explains to Andrew how to operate the shotgun and hands him the weapon as he helps Andrew point the gun at his own head. The screen goes blank, and a shotgun round is heard. 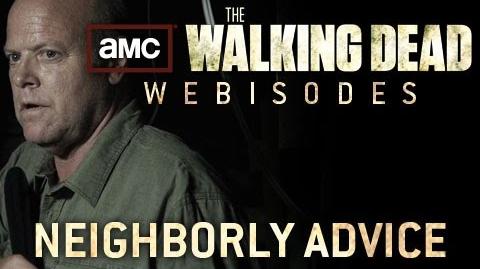