"Parting Shots" is the fourth and final episode of The Walking Dead Webisodes: Cold Storage. It is the last episode of the web series overall. It premiered on October 1, 2012. It was written by John Esposito and directed by Greg Nicotero.

Chase was only grazed and survives the gunshot and slowly makes his way around the facility. While walking to a door to enter the facility, he encounters a zombified Harris. Chase smashes Harris' head in with a cinder block and takes his machete. Chase manages to break a lock and enters the facility. While up there he enters a room full of furniture with a lone woman named Kelly being held against her will. She screams, but Chase reassures her that he is a good person. After that, the two begin to escape the facility knowing B.J.'s dark secret.

Once downstairs, B.J. catches up to Chase and Kelly and threatens to kill Chase to leave without Kelly. The three banter back and forth after Kelly reveals B.J.'s dark secret of killing his workers and others. Kelly then decapitates B.J. After that, Chase and Kelly grab keys and head for a truck that is low on gas. They drive off leaving the facility to be overrun by walkers and an undead B.J. left inside. Chase and Kelly's fate after this is unknown, but they were planning to head for Cynthiana, Kentucky to meet Chase's family and then head to a supposed safe zone in Washington, D.C. 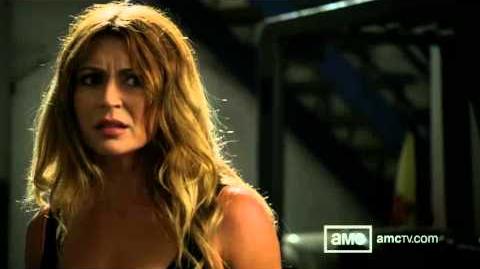