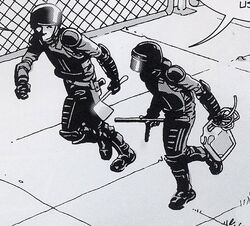 The Riot Suits or Riot Gear were found by Glenn and Maggie in the prison. They were used between issues 25 to 48. Riot Gear were a means of protection used by Police Officers in case of a riot or emergency. Sparring gear that was used like Riot Gear in the TV Series episode, "Guts", where other survivors in Atlanta wore it to protect themselves from the walkers and cleared a path for Rick Grimes and Glenn. Many officers died due to the weight of the armor and lack of weapons. The zombies outnumber the prison guards and they were killed by other prisoners during the riot and reanimated into walkers.

The prison had police uniforms and weapons inside where Glenn and Maggie recovered a couple of riotsuits, and one of them saved Glenn's life.

Rick, Glenn and Michonne went to Woodbury, because they saw a downed helicopter. They didn't find any survivors, but they found a little town; Woodbury. Inside the town was total nightmare; Michonne was raped, Glenn locked down and Rick's right hand was cut off. The group with a few Woodbury residents were able to escape. Rick's and Michonne's riot suits were left in to the town, and later, Rick's suit was used by The Governor.

Riot Suits were commonly used in fight against Woodbury survivors. A small prison group was sent to look for some supplies at Woodbury, the Governor's right man, Bruce Cooper, and his squad, found Andrea, Tyreese, Glenn, Maggie, Michonne and Axel in a store, and Glenn tried to talk some sense to him. Bruce recognizes him and discharges his gun at him in the chest. While all of his squad were killed, Glenn didn't die because of his suit. Although, he noted that he couldn't breathe very well.

Later, Andrea wears the suit, because Dale makes her wear it. She used it first when Woodbury attacked the prison. Andrea also had a helmet, but takes it off, so she could get a clear shot to the Governor, who was using Rick's riot suit. She fails, and a bullet scrapes her skull. She does not die, but it's not because of the riot suit; just pure luck.

Later, Michonne and Tyreese were complaining about leaving the others and going to the woods, so they could scare the Woodbury people so they wouldn't attack them anymore. The two were able to kill Eric, Jim and Daniel, but Tyreese was captured and Michonne escaped. Later, The Governor takes off his suit and decapitates Tyreese in front of the rest of the prison gang.

After Andrea, Dale, Glenn, Maggie, Sophia, Ben and Billy left the prison, Hershel and Billy Greene started to use the suits. Billy is often seen in the tower, sniping, taking over Andrea's and Glenn's job. Billy threw a grenade at the Woodbury people, but it didn't work very well. Later, they both got shot in the head (Billy didn't use a helmet so he got shot on-panel and Hershel was kneeling next to his body and The Governor shoots him in the head.) Rick and Carl got away, along with the rest.

Benjamin from the Kingdom uses the riot gear whilst on patrol on the outside of the Kingdom, in an attempt to protect himself from being bitten by a roamer.

Sparring Gear was used like Riot Gear during the television series episode, "Guts", where both Morales and T-Dog wore the gear to protect themselves from the two walkers outside the department store that they were hiding in. When Rick and Glenn made their way to the hideout, both Morales and T-Dog come out in protective gear and beat to death the walkers to clear the path and allow Rick and Glenn to enter the department store.

In varying episodes of Season 3 and Season 4 they used parts of the riot gear, it only being used completeley in the last episode of Season 3, Glenn and Maggie both wore full riot gear while protecting the prison. Glenn wears the full riot gear again in "Inmates", as he wears it to barge through the herd of walkers that have infested the prison since the aftermath of the second attack. He keeps this riot gear on (sans helmet) until Glenn gives it to Eugene in "Us", as part of a deal that if Abraham's group will continue to push forward towards Terminus, he would give Eugene the riot gear for protection. In "A", Rick notices one of the Terminus residents wearing the riot gear. 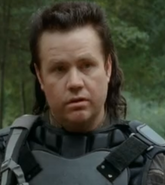 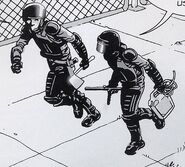 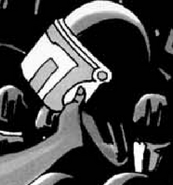 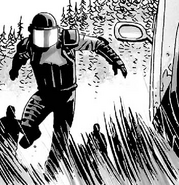 Retrieved from "https://walkingdead.fandom.com/wiki/Riot_Gear?oldid=1389243"
Community content is available under CC-BY-SA unless otherwise noted.