Sisters of Mercy Hospital is a location that appears in AMC's Fear the Walking Dead. It is located in Los Angeles, California and was destroyed along with the rest of the city as a result of Operation Cobalt.

Sisters of Mercy Hospital is the hospital Travis tries to take Griselda Salazar to after she is injured by falling scaffolding, during the riot. The hospital has shown to already be overrun, with an infected patient and doctor walking outside. The police put the infected down, however the hospital is shown to be burning in flames from the inside. 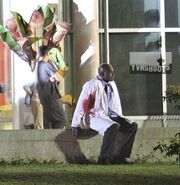 Retrieved from "https://walkingdead.fandom.com/wiki/Sisters_of_Mercy_Hospital?oldid=1300703"
Community content is available under CC-BY-SA unless otherwise noted.