Song of Survival Vol. 2 is an original soundtrack with exclusive songs inspired by the fourth season of The Walking Dead. AMC partnered with Anchor Bay Entertainment and Republic Records to release another companion soundtrack album. It was relased physically on August 26, 2014 exclusively at Walmart stores as part of the special edition Blu-ray and DVD set The Walking Dead: The Complete Fourth Season.[1] 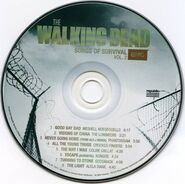 Retrieved from "https://walkingdead.fandom.com/wiki/Songs_of_Survival_Vol._2?oldid=742033"
Community content is available under CC-BY-SA unless otherwise noted.