Abandoned, and overrun by the undead.

The St. John's Dairy Farm is the main location in "Starved For Help" of Telltale Games' The Walking Dead: Season One. Lee Everett has to make several key decisions at this farm which define the relationships and friendships of the other survivors in his group.

Before the outbreak, this farm served as a prime dairy farm and home for the four members of St. John Family. It was used to produce dairy products such as butter, cream, cheese, and milk. It was owned by Brenda St. John and her husband, Terry St. John, who also had two sons, Andrew and Danny, who helped out with the chores. The farm was once the pride of the Macon area, being awarded for its accomplishments and excellent dairy products and livestock. Several awards and ribbons can be seen in the barn as well as the family home. The farm, at one point, even offered tours of the dairy farm as seen on the farm's sign.

This farm was first encountered by Lee, Mark, Ben, and either Carley or Doug. Lee and Mark explore the farm, examining the make-shift electric fence while Ben and Carley/Doug returned to the Motor Inn with a basket of home-made biscuits baked by Brenda St. John.

While Lee and Mark are exploring the farm, they fix any weak spots in the fence, and also remove several burnt corpses. They stumble upon a fence that had collapsed and are repairing it, but are trapped as it is suddenly turned back on. A group of Save-Lots Bandits begin attacking, shooting at Lee and Mark with crossbows. Mark takes an arrow in the shoulder, but the two eventually make it back to the farmhouse, when they bring up the topic of trading with bandits.

After Katjaa is sent to examine their ailing cow, Maybelle, Lee and Kenny begin to be suspicious of the St. Johns after finding a locked door in the back of the barn. Andrew would not reveal anything about it, nor would Danny or Brenda. After distracting Andrew by removing a belt from the generator, Lee uses a multi-tool to remove the lock from the back room. The others had left for dinner, and Kenny had used an excuse to have Lee stay behind. As he opened the door, the St. John's slaughterhouse was revealed. As Lee turns to leave, he is surprised by Andrew St. John, who insists that the room was used for skinning and dressing hunted animals. This doesn't reduce Lee's suspicion, but he heads to dinner anyways.

As Lee and Andrew enter the house, Brenda is preparing the meal, and everyone is seated at the dinner table, waiting. Lee asks where the bathroom is so he can "wash his hands", as the St. Johns were vague about Mark's condition or location. He goes to "wash his hands", but instead sneaks upstairs to the bedroom, but does not find Mark. After turning on a power cord in the bottom of a closet, a light reveals that there is a hidden door behind a bookcase in the bedroom. Upon moving the bookcase and opening the door, Mark is revealed to be hidden inside, his legs missing and a bloody mess all over his body and the floor. He moans to Lee, "don't....eat...dinner", and Lee races downstairs, and can either prevent or allow Clementine to eat Mark's meat.

After Lee blurts Mark's condition, the St. John's reveal themselves to be cannibals, drawing their weapons, taking Clementine hostage, and knocking Lee unconscious after Mark appears from down the stairs. Katjaa and Duck are kept held in the house, while Kenny, Larry, Lilly, Clementine, and an unconscious Lee are locked in an ajoining meat locker inside the back room of the barn.

Upon waking, Lee talks with Clementine and searches the room, looking for a possible escape route. Larry, enraged, is yelling and banging against the door. He goes too far, his heart giving out, and he collapsed to the floor. Lee can either choose to help save Larry, or help Kenny crush his head with a salt lick by holding Lilly back. Either way, Larry is killed, and Lee finally finds a way out, through a ventilation air duct. He takes a coin from Larry's body, unscrewing the bolts, and removes the air conditioner. Clementine crawls through the duct, jumping into the back room, and unlocks the meat locker. Lilly stays behind with her dead father, and Clementine. Kenny and Lee move into the back room, before forming a plan to take the guard, Danny, by surprise.

As they move out to attack Danny, Andrew moves up, ordering Danny to kill all but one prisoner. Lee and Kenny seek refuge in a stall in the barn, eavesdropping on the conversation. Andrew leaves, having Danny set up a bear trap and then killing the prisoners. As Lee opens the door to peek outside, Danny is revealed to have noticed them, and points his rifle at Lee. After a struggle, Lee can choose whether or not to kill Danny. After moving out of the barn, Lee advances on the farmhouse, opening the door to reveal Brenda holding Katjaa hostage with a pistol. Lee reasons with her, backing her up the stairs, until a zombified Mark grabs her, and rips out a chunk of her neck, killing her.

Lee and Katjaa move outside, where Andrew is holding Duck hostage. Kenny charges him, but takes a bullet in the side, and Katjaa moves to assist him. Andrew is distracted, and Lee advances on him, causing a brief stuggle. After nearly dying at the hands of Andrew, Lee can choose to kill Andrew or leave him for the walkers, who had broken through the fence. Lee's group leaves the farm, leaving it to be overrun by walkers. 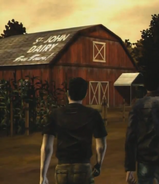