I don't have edit access, so I'll just put this here. Someone with access can add it in the trivia section.

Omid, written "امید" in Persian (Farsi) literally translates to "Hope". Its a common name used in Iran. I think his name being "hope" was intentional and has some signifigance in the story.

Why is Omid listed as a determinant? Regardless of who you choose to save first, Omid gets on the train and is in the preview for Episode 4...

I agree, I don't know who did that, but Omid lives no matter what you do.

yeah weird, i was already checking my game if he could die O.o

I've added a bit to the Trivia about his leg, whcih is what it looked like here at 0:48.

I wanted to pinpoint that, while actually admitting to be left-handed, Omid uses his right hand when firing his gun in Episode 5, should we put this on the Trivia section? Ulyssestheloner (talk) 13:16, September 6, 2013 (UTC)

Can't it be inferred that he met Molly, because she came back to the house with them at one point.

Omid was unconscious throughout the entire time Molly was there, and even when he awoken, Molly was not present in the room, and left shortly after before Omid was able to get up, so no. SilentGlaive Knowledge is power 19:02, December 5, 2013 (UTC)

Anyone else think he looks just a *little* like Martinez? --TheMightierWolf

I have a question

Why in the seven hells Clementine is responsible for Omid's death? Give me ONE good reason, not just a "she was the one getting robbed, if she wasn't getting robbed, Omid wouldn't have died!". The Grim Botches Edits (talk) 14:29, December 19, 2013 (UTC)

I changed it. After playing the game twice through last night, there is no way she is respoinsible for his death, indirectly or otherwise. Very very silly to pin that on her by whoever added that. 1whoknocks (talk) 14:37, December 19, 2013 (UTC)

That would be me. Whose Gun was it that killed Omid?  Who carelessly left their gun for Michelle to find that was used to shoot Omid? How is this any different from Ben Paul causing the death of Brie?

Sign your name after you post Iceryder. It isnt Clem's fault that she was held at gunpoint grabbing a water bottle. She didnt pull the trigger, nor tell Michelle to shoot Omid. It was all an accident. When I tried to argue that Carl in the TV show was indirectly responsible for Jimmy and Patricia's deaths because him firing his gun attracted the walkers, I got shut down. "Indirectly" is a slippery slope, you could say a lot of people are indirectly responsible for various deaths, but that would be counter productive. Who knows what would have happend if Clem had her gun, we dont know that Michelle didnt have one already. Many unknowns but making Clem indirectly resonsible is silly. 1whoknocks (talk) 15:21, December 19, 2013 (UTC)

If there is an edit war about her age or her Killed Victims I will have to lock the page and doing that before her info is updated all of the way wouldn't be beneficial. People would have to tell admins what to insert. This applies for Omid as well.

How is that a threat? I'm just letting everybody know so it doesn't happen again. And IceRyder never acknowledged he understood what you were saying.

It's all new to me. She left her gun, a weapon that was used to kill Omid. I know she didn't pull the trigger or tell Michelle to shoot but she didn't do that with the Stranger yet Lee Everett is listed as "Indirectly Caused" on her kill list. In a way Carl is responsible for Jimmy & Patricia's death because he could've told his dad that zombie Shane was behind him and he could've taken him out without the use of a bullet but that situation but that's a different situation, the situation here is similar to Carl's cause of Dale's death, the zombie that was killed by him was accidentally led there by Carl, his careless mistake led to another mans death same with Clementine leaving her Gun. There was no sign Michelle was already in posession of anything , she walked in the restroom with no gun. I know the term indirectly and Omid was killed by a "gun" that Clementine "left", wouldn't you say that';s a connection was the indirect cause of his death? IceRyder (talk) 16:14, December 19, 2013 (UTC)

Alright fine I'll drop it, even if you provided nothing to back it up, Jeez some users take this way too seriously and make it personal. IceRyder (talk) 20:31, December 19. 2013 (UTC)

OK I'm sorry for the incoming rant but when Ben makes any sort of mistake then everyone says he "indirectly caused" somebody's death but when a loved character like Clementine messes up and leaves her gun on a table for somebody to find then everyone denies she had any involvement. I think if we can blame Ben for Katjaa's death because he traded with the bandits to try and save his friend, which lead to the bandits attacking, which lead to zombies getting in, which lead to Duck getting bitten, which only then lead to Katjaa commiting suicide, then I think we can blame Clem for leaving her gun on the table causing Michelle to shoot Omid.Orcaboy (talk) 22:42, June 3, 2016 (UTC)

I fully agree. Clementine didn't plan for Omid to get killed, nor she planned Michelle to walk in there, but the fact is, Omid being shot at was only possible because of one of Clementine's actions—leaving her gun unattended. And she is responsible for that. I wouldn't take it as a way of saying that she is to blame per se, but as one to say she is partly responsible. In fact, to an extent, Omid and Christa should be held in question too, since the death was only possible because Clementine was left alone in that restroom. I would go and edit that in, though I know how that would go here.

By the way, this is not an attempt of blaming it on characters, but looking at what happened and realizing how things connect.

I believe we count it because we know that Ben blames himself as well. Sure, it's not the best system, but even the developers themselves have pointed to Ben as a cause for their deaths, while there has been no questions they have answered regarding Clementine's indirect and accidental role in Omid's death. That accounts for the difference.

When Undead is appropriate, then it is used. Omid is dead, it would defy all logic for Christa to leave him to reanimate. I can't believe this is even a debate... 1whoknocks (talk) 20:02, December 19, 2013 (UTC)

Omid was last shown dead so the status is left as what we last saw him as and before you mention that Jim from the TV or Comic series wasnt actually seen undead like his status says in that case the group left Jim to reanimate unlike Omid where it is assumed Christa or Clementine prevented Omid's reanimation as they do know that you dont have to be bit to turn, so his status should be left at Dead.

It's not really a debate. I completely agree it would be illogical to leave him to reanimate but for some reason listing that Christa probably shot him, to keep him from reanimation, keeps getting undone & I keep getting a tongue lashing for it. There's only two options, Christa puts him down out of mercy or she leaves him to return undead. Others are saying neither happens... That, to me, defies all logic. 24.102.148.165 20:11, December 19, 2013 (UTC)

I can't help but hope that the mysterious character believed to be dead by Clementine who appears in "A House Divided" is somehow going to be Omid.--Frankgrimes1 (talk) 23:12, January 10, 2014 (UTC) 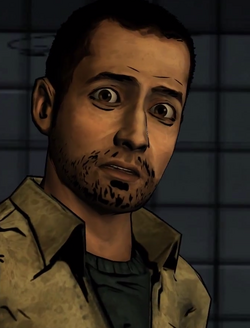 Retrieved from "https://walkingdead.fandom.com/wiki/Talk:Omid_(Video_Game)?oldid=936856"
Community content is available under CC-BY-SA unless otherwise noted.