Another man, Marvin Duekholz, has recently been added to the IMDB cast list for the third season premiere, supposedly playing the role of 'Phillip Eagle'.

A found a source mentioning this:
In addition, according to the IMDb, Marvin Duerkholz (The Devil Inside, "Teen Wolf") is set to appear in "The Walking Dead"'s Season 3 premiere episode as Phillip Eagle, a new character who does not appear in the comics.[1]
Wikiasmikia 22:01, February 3, 2012 (UTC)

why is this article called the governor (tv series), why not brian blake (tv series) inless they change his name

Glenn himself said it, not just some random person, we should keep it as Phil Dunply for now because that's what Glenn said it was.Intayla 16:12, March 8, 2012 (UTC)
As Intayla wrote on a user talk page:

“@WillNovah: Is the Governor named differently in the show, Or is just Phil Or Blake Or just The Governor?” Phil Dunphy
I think this is a joke. http://en.wikipedia.org/wiki/List_of_Modern_Family_characters#Phil_Dunphy Wikiasmikia 16:42, March 8, 2012 (UTC)

One, can we really call him Brian Blake? I only ask this becuase we're not really aware how canon Rise of the Gov is to the TV Show. And secondly, I think this guy is going to have some awesome quotes, the trailer already gave us one when he said he was taking everything back. This guy is going to rock!JokersFlame (talk) 05:04, July 14, 2012 (UTC)

Shouldn't we hold off before we call him Phillip?

I doubt they are going to maintain the Brian impersonating his brother story arc because the photo Governor picks up shows a man who looks exactly like him (Phill looked similar to Brian, but they weren't identical).

So with that in mind who is to say they're going to even call him Phillip?

Im not saying its not a likely scenario, but it's too early to assume stuff, no?

I'm one of the people who read the comic through trades, meaning that I have not read past issue 102 yet, and I also watch the TV show. Seeing as the Governor storyarc was such a long time ago, I found it reasonable to assume that a page on the TV show specific character would not contain spoilers for stuff happening after issue 102 of the comic at least. However, lo and behold, it goes ahead to spoil something after all. I am talking about the following trivia (SPOILER WARNING):

"""In "Hounded", Merle chooses not to reveal to The Governor that Michonne has survived, due to the fear of his wrath. This is similar to how Dwight decides not to tell Negan about Paul Monroe's escape, for the same reason."""

So, the only similarity is that: Character A lies to Character B, where Character B has authority over Character A, regarding a Character C's whereabouts. In my mind, not enough of a similarity to warrant it's own trivia point, especially not one as recent as post issue 102.

That's just my two cents, never replied to anything in any wiki before, hope I did it the right way^^.

Anyone else noticed that the eye he lost keeps changing? (It's  his left eye in the trailer and right on his profile picture)

He's looking in a mirror. I honestly don't understand why so many people are confused by that. Shellturtleguy (talk) 22:22, February 21, 2013 (UTC)

For the last freaking time...

Just curious, how do we know his name is spelled with one "L"? Is that from the novel or comic series? Just wanted to point out that AMC has his name spelled as Phillip in the plot summary for Killer Within. --Mistertrouble189 (talk) 04:36, March 31, 2013 (UTC)

Why has this page become uneditable?

During a lot of the governor's scenes, or when Woodbury is battling Rick's group, there's this weird noise that plays, like heavy stomping almost but with a rhythm. I've heard it before in the episode where Rick's group rescues Glenn and Maggie (Made To Suffer, I believe), and in "Welcome To The Tombs" when the Governor's army is searching the prison for Rick's group. Does anyone know what that sound is??

Shouldnt he be unknown not alive like Shumpert and Martinez? (ppp)

No because he's confirmed to appear in season 3 but nothing has been released on snm so they may have died in the 7 month time skip. 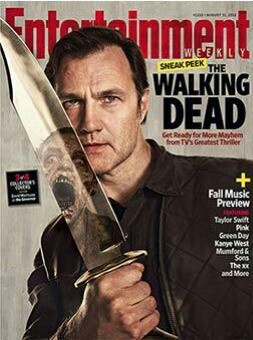 Does anybody know the company or the specifics of The Governor's knife? Ive looked through countless forumns and the only thing ive gathered is that it is a very large bowie knife.

Brian was in the tv series

Because we don't know if it all confirmed and legit. In the novel, Philip was The Governor's brother, in the TV Series, Philip is The Governor. For now, Brian does not exist in the TV Series. Also, in the Novel...it was Philip who was killed by Nick, Brian killed Nick after Nick killed Philip.

I know it wasn't confirmed, but the notebook Michonne finds in Say the Word is proof the novel happened in the tv series, but in a different way, Nick killing Brian instead of Phillip. Not everything needs to be 100% confirmed you know.Spiderachim123 (talk) 02:59, July 17, 2013 (UTC)

Seeing names in a notebook does not mean that the events happened at all. They are most likely just a nod to the novel. Unless it is stated that Brian is his brother and was killed by Nick, it can't be added as their is no proof it actually happened. Saying that it did is complete speculation. Also, things should be 100% confirmed, as we can not just assume or guess things happened. -Lukesav1998 (talk) 05:30, July 17, 2013 (UTC)

Having not seen the new episode, I still have to ask: What the hell does Brian Herlot mean?

In the Comics it was Lily that killed Phillip, Possibly lily that phillip met in episode 6 may end up killing the governor in the midseason finale or the next half of the season

I realise that it may be a little early to be thinking about this, but a potential move of this article to "Brian Heriot" may be worth thinking about in the coming weeks. Considering the Governor's self-reboot in the last episode it's clear he no longer identifies with his old name or life, and if he does continue to be referred to exclusively as "Brian" than I think that would be the most appropriate title for the article. Yes, Philip Blake is his birth name, but with the collapse of all form of law and government the concept of "legal names" becomes null-and-void. Any thoughts on the matter?--The Boy

Sorry it was quite late when I had wrote the speculation theory, all that I care about is being able to get my thoughts out really, and would rather see a discussion then debates on the perfection on people's grammar, a true purpose of the talk page - Anonymous User

In TWD Survival instinct Daryl meets a cop who is named Jimmy Blake.Can't this guy be the Gorvenor's brother?His surname is Blake as the Governor is named Philip Blake and he mentions that he has a brother.

Would a picture of his corpse be better for the second death picture? because it shows that Lilly shot him and he's actually dead in that one, just wondering because I have no idea how to put pictures on, will have to learn that.

His final commands were move up said before Ricks ambush and after the tank is through the fences.

Hi, don't the claimers and wolves still count as antagonists? Maybe I should have named their defacto leaders instead?

Retrieved from "https://walkingdead.fandom.com/wiki/Talk:Philip_Blake_(TV_Series)?oldid=1300861"
Community content is available under CC-BY-SA unless otherwise noted.