Since the next episode is called "A house divided" speculates that the cabin group will get seperated.Rebecca appears in atleast episodes 1-4 since shes in episodes 3 and 4's title screen.If she and clementine are in the same group if the cabin survivors split up,She might become responsible for clementine if they start bonding with each other and also if the other members of there group die and its just her and clementine shes obviousy gonna be taking care of clementine and the baby.Just throwing that out there District7ersz (talk) 01:20, January 2, 2014 (UTC)

I think she'd just abandon Clementine if the others died. I believe Luke will be the new caretaker. Bloxxasourus (talk) 08:08, January 5, 2014 (UTC)

I honestly wouldn't see that heppening. as I liked to say in my LP on YT, rebecca is an old ragity bitch. and appears to see Clementine as a threat that should be killed or banished ASAP.

Similarity of Rebecca to Diana

There is a resemblance, but it's very unlikely they are related. There is definitely some influence of the art style that makes them look similar. InspectorJ (talk) 10:53, January 18, 2014 (UTC)

If Diana and Rebecca were related, then Clementine would recognize her, and perhaps Rebecca wouldn't being such a B&tch to her own niece or second cousin or whatever. right?ZoraLink10nLink (talk) 02:55, January 28, 2014 (UTC)

Plot twist: Rebecca is Lilly's mom!! I know it doesn't make sense but think about it, Lilly could have Rebecca as a mom but that would mean the Rebecca would have had an affair with three guys: Larry, Alvin, possibly Carver or that one guy Clementine was talking about. But this is just a thought.

No.Larry keeps on his pocket his wife's ring.That means his wife died before or after the apocalypse. DraculaTepes14 (talk) 15:31, February 16, 2014 (UTC)

Besides. Rebecca is more dark-skinned, and Lilly is white.

I think it sounds dumb but I think Rebecca will die when her baby comes out just like Lori in TV series.In Episode 3's background I see Clementine helping Rebecca.I think they are locked in some room along with the cabin survivors or alone.And Rebecca's baby begins to come out and Clementine (if she is alone with her in that room)don't have medical supplies and maybe Rebecca tells Clem to get something sharp and take her out from her stomach.What do you think?          DraculaTepes14 (talk) 15:43, February 16, 2014 (UTC)

That is actually a pretty good prediction, here's a reward! 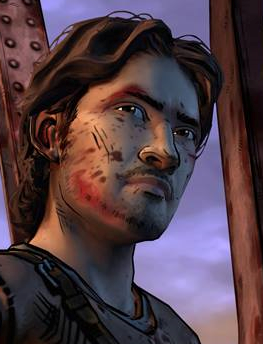 I don't know how to edit, so can someone do it for me? Rebecca didn't die of cold, she died of organ failrue. Which organ I don't know but I asssume heart.

She didn't die of cold, it would of taken significantly longer, chances are she had a heart attack as she died so quickly and un-noticably. She was dressed warmer than the others, allthough she was weaker if it was SO cold that someone died  someone would of died before her. Not to mention a human can go without shelter n cold weather for 3 hours approximatley, they claim that they can " still go back"  so they probably have been walking for a short time and are close. People with cardiovascular diesease are prone to heart attack in cold weather so considering Rebecca just had a baby and she is a bit weak it would mean she did die of a heart attack and not of cold.

Did rebecca get bit

It was unlikely; I think she merely died from blood loss or from some other factor that resulted from having the baby, and when anyone dies in this universe, they become a walker, regardless of whether they were bitten. InspectorJ (talk) 21:37, July 22, 2014 (UTC)

Did she have a child prior to the apocalypse?

Rebecca No Going Back

isnt reecca's corpse going to appear on 205, and shouldnt that mean we should add that in her page

Well, we don't know for fact her corpse will be shown as of yet, so it is much better to leave it as unlisted until the episode's release, or more reliable information is discovered. InspectorJ (talk) 23:41, July 24, 2014 (UTC)

Retrieved from "https://walkingdead.fandom.com/wiki/Talk:Rebecca_(Video_Game)?oldid=679096"
Community content is available under CC-BY-SA unless otherwise noted.