"Long Road Ahead" to "No Time Left"
"Broken Toys" (Dream)

The Train is the main vehicle and a major location for the survivors in "Long Road Ahead" in Telltale Games' The Walking Dead. The survivors spend the last half of the episode on the train recovering and bonding after the many deaths of the original group of survivors.

The train was owned by PV&R likely a nod to the Real-life Norfolk Southern judging by the paint scheme and was operated by a unknown train engineer. This train was mainly used to haul large freight across the State of Georgia and possibly neighboring states as well. The road number of the locomotive was 4070 and the train was powered by a diesel-electric motor. The train was also the home of Chuck who was a homeless man traveling through the cities in one of the train's boxcars. It is unknown when he became homeless and used the train as his new home.

After a unknown period of time, the train engineer was forced to stop at a highway-rail grade crossing due to hitting several abandoned cars on the tracks, causing the train to derail and spill its cargo of iron coils When stopped, it is quite likely that he was attacked in the locomotive and killed when his head smashed through the cab window. Since then, the train did not move until Kenny and the RV arrived at the blocked road.

When the group of survivors arrive, they are forced to abandon the RV and try to look after Duck who is slowly turning into a walker. Lee searches the boxcar for any supplies for him finding Charles' water in the boxcar. Thinking that the train is abandoned, he takes it and gives it to Duck. Realizing that the train could be operational and therefore able to get them to Savannah faster, Kenny wanted to try and get the train working again. Once Lee decouples the remaining freight cars using tools from the train's locomotive, he is introduced to Charles who decides to join the group for the time being since they are taking "his home" (being the boxcar). Lee then eventually figures out how to start the train and brings the locomotive to life. When ready, the group boards the train and begin to make their way to Savannah.

The survivors continue on down the track heading to Savannah, Chuck tells Clementine that she will die just like Duck and Lee then confronts Chuck about what he said to her. Charles says that Lee needs to take better care of Clementine by cutting her hair so that walkers can't grab her easily as well as begin training her on using a gun to which Lee then agrees. After training Clementine with a pistol and cutting her hair with Chuck's scissors and bonding with her, Lee heads back up to the cab when Ben Paul confesses to him about the incident back at the Travelier Motel. Lee gives Chuck his bottle of Whiskey and says anyone is welcome to have a drink with him to which Lee offers Kenny Chuck's offer. While gone, Lee grabs a map of Savannah from the engineer's seat and shows the map to Clementine asking her where she would like to go when they reach the city.

Kenny then shouts from up front and the train comes to a grinding halt at a blocked highway overpass. The group gets out and meets new survivors, Omid and Christa, while trying to figure out how to move the blocked debris to allow the train to continue on. After Lee gets the necessary tools from a nearby train warehouse, he begins cutting away at the metal tanker blocking the tracks when a herd of walkers begin to approach them. Once the blocked tanker falls and clears the tracks, everyone piles back into the train and continue onward to the city.

The episode ends with the train slowly approaching Savannah, the city skyline being seen in the background.

The train is seen abandoned outside of Savannah during the episode's opening. It is also mentioned by Vernon when he asks Lee if he came into Savannah from the railroad.

The same shot from "Around Every Corner" is again shown at the beginning of the episode, but this time with a herd of walkers slowly walking past the train. Later, it is possible for Lee to tell Omid and Christa to meet him at the train after he finds Clementine. If Lee chooses this option, he can also tell Clementine to meet the two of them there before he dies. 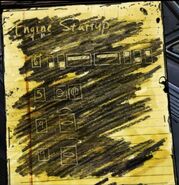