The shotgun controller shell and color scheme and sensor may look the same as Zombie Hunter, but the only difference is that the controller has blood drips on it and the sensor bar is green and has blood drips.

A Crossbow Edition was released.[3]

In this game first-person shooter players assume the role of a former prison guard battling a zombie apocalypse. Players use sniper rifles, shotguns, machine guns, and grenade launchers to kill hordes of attacking zombies. Players move through levels and are awarded points for accuracy and the number of walkers they kill. Gameplay is highlighted by realistic gunfire, screams of pain, and comic-book style blood splats on screen corners.

The game is submitted for an ESRB “T for Teen” video game rating.[1] 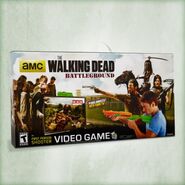 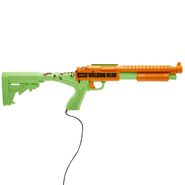 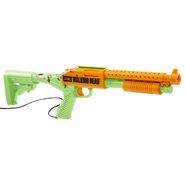 Crowssbow Edition
Add a photo to this gallery

Retrieved from "https://walkingdead.fandom.com/wiki/The_Walking_Dead:_Battleground?oldid=914857"
Community content is available under CC-BY-SA unless otherwise noted.