View source
watch 02:07
Spider-Man: No Way Home Trailer Dropped - The Loop
Do you like this video?
Play Sound 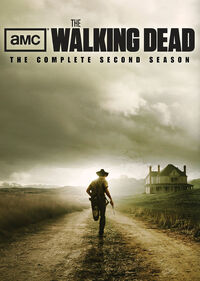 The Walking Dead: The Complete Second Season box set is the second DVD and Blu-ray 4-disc compilation of The Walking Dead episodes that includes the entire second season with bonus features. It was released in region 1 on August 8, 2012,[1] in region 2 on August 27, 2012[2] and in region 4 on June 20, 2012.[3] Special features include eleven featurettes, six audio commentaries, the six-part webisode series The Walking Dead: Torn Apart and 30 minutes of deleted scenes across eight episodes.[4]

The package includes an assortment of commentary tracks spread across all four discs and deleted scenes, featurettes, and "webisodes" all on disc four.

Webisodes (1080p, 19:42): Six Internet shorts from the world of "The Walking Dead" which tell a tale of life in the moments following the initial zombie outbreak. Available with optional audio commentary with Writer/Director Greg Nicotero.