The Walking Dead: Zombie Hunter is a first-person shooter Plug-and-Play TV game, based on characters from The Walking Dead TV series. It was released in the fall of 2012

In this game players must rescue urban survivors from a zombie apocalypse. Players use shotguns, rifles, and crossbows to kill waves of zombies that lurch toward the screen; enemies emit green splashes of blood when hit. Bonuses are awarded for successful headshots, and players lose points for shooting/killing unarmed civilians. Red blood effects appear on screen when players' character incurs damage.

Includes dozens of levels of action and game play across thee modes:[1]

Zombies takes multiples shots. The player who gets the last shots on the zombie gets credit for the kill.

The game is submitted for an ESRB “T for Teen” video game rating.[2][3] 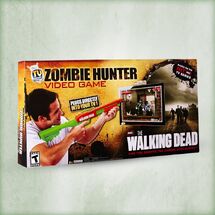 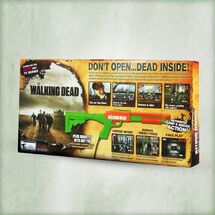 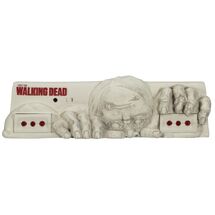 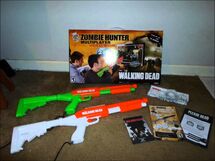 Retrieved from "https://walkingdead.fandom.com/wiki/The_Walking_Dead:_Zombie_Hunter?oldid=914856"
Community content is available under CC-BY-SA unless otherwise noted.