"For season 3, it is really important to us to widen the scope of the characters in order to tell more of the story, and it allows some new signers for the set. To do so, we will be splitting the season into two parts, which will focus on the characters in the prison (Part 1) and the characters of Woodbury (Part 2). Now, there is obviously some crossover of characters between the two sets, but it does mean that there will be a lot of new characters for Part 2. We are also working tirelessly to acquire lots of awesome wardrobe pieces and props from season 3, so fans should have lots of really amazing things to look forward to in the upcoming sets."

"Development for the two sets is happening simultaneously, so all of the cards should fit together rather seamlessly. Card numbering for Autograph, Wardrobe, and Base cards will continue from Part 1 to Part 2. We want there to be a comprehensive feel for Season 3, so although it is broken up into two sets, we will get one overall picture from the two sets." 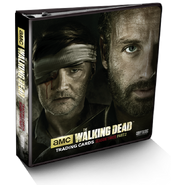 Retrieved from "https://walkingdead.fandom.com/wiki/The_Walking_Dead_Season_3_Trading_Cards_Set_2?oldid=613270"
Community content is available under CC-BY-SA unless otherwise noted.