The Walking Dead Board Game

The game only allows the strong to survive and the weak turn into walkers, and then turn against their former friends! Fight your way through zombie-infested Atlanta with your fellow survivors. Grab some weapons to clear a path. Visit destinations like the department store, the police station, old folk's home, and the CDC. Find the tools you'll need to live another day like weapons, allies, a car, or a swift mount. Take on the role of Rick, Andrea, or one of the other hapless survivors and scrounge for sweet weapons like a Shotgun or Crossbow. Keep your eyes open for new allies, but watch your back! When supplies start running low, it's every man for himself. If you can make it back to camp with enough gear to defend yourself and those you still care for, you win!
Should you fall to the hungry horde of walkers, the game doesn't end. When a player dies and becomes a walker, they leave the world of the living behind and seek out the remaining survivors. Spring surprise attacks on the living, cause the walkers to frenzy, or contaminate the survivor's supplies. Put the bite on your former friends and they'll join you in your pursuit of the living. As a survivor, you'll work as a team with your remaining buddy to ensure the camp site stays protected. Share weapons and other resources. The fate of the human race is in your hands, either as a survivor or a walker. Test your survival skills and fight to live another day. [3]

Jun 1, 2013
Streets of Atlanta is an unofficial fan-made expansion released to the public with permission from Cryptozoic Entertainment, designed by Nikolai Schwarzl.[4]

Streets of Atlanta is a dice-based expansion for The Walking Dead Board Game that expands the core game to a whole new experience. Visit four of six locations, then return to either the camp or the prison. Use new weapons and fate cards to survive the zombie apocalypse — but beware because if you die, you turn against your fellow survivors. All you'll want is their brains. Good hunting!

Streets of Atlanta allows up to six players to compete with newly designed character cards to match the look of season three of the AMC TV show The Walking Dead. Other features of this expansion: 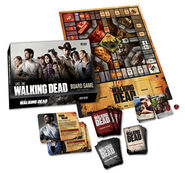 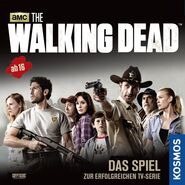 German edition
Add a photo to this gallery

Retrieved from "https://walkingdead.fandom.com/wiki/The_Walking_Dead_TV_Board_Game?oldid=1335414"
Community content is available under CC-BY-SA unless otherwise noted.