The Walking Dead Webisodes: The Oath

The Walking Dead Webisodes: The Oath is a three part story web series. It premiered on October 1, 2013. It was done in order to help promote the return of Season 4 of the TV Series.

Same as The Walking Dead Webisodes: Torn Apart, the storyline takes place prior to the events in Season 1 of the TV Series.

The webisodes begin with Paul and Karina's camp being overrun by a horde. The duo flee the camp, leaving behind a fatally wounded female survivor for the "decays". The following morning, while searching for a car, Paul picks a revolver off of a nearby corpse, and Karina, within the next minute, the keys to a nearby car. While searching, it is revealed that Paul was heavily cut on the torso while they were running from the walkers.

Upon discovering this, an already-dazed Paul rides in back while Karina follows a map that they discovered to find any nearby medical stations. After searching through several overrun stations, they eventually arrive in one hospital that is seemingly clear of walkers. Karina clears the debris that was being used to block the doors and pulls out a wheelchair, which she uses to move Paul around as they search the hospital for medical supplies.

While searching, Karina opens up a supply closet and begins searching. She is interrupted by the sounds of a walker creeping up behind them, and is almost killed until a woman comes from behind and stabs it in the head. The survivor introduces herself as Gale Macones, a doctor that worked at the hospital prior to the apocalypse. They wheel an unconscious Paul into a room and Dr. Macones patches his wound to keep it shut. She secures his hands as a precaution, implying that she knows that bites cause people to turn.

The women walk into the hallway to get to know one another. Karina tells her about her group, which had numbered at 25, having been overrun by a large group of walkers a few nights prior to the current moment. Similarly, Macones tells of how the hospital used to obtain regular supplies from the government, which suddenly stopped coming. With the sudden lack of supplies and increasing number of patients, the hospital quickly turned to chaos, people killing one another for possession of the medical supplies. She also spoke of 7-8 of the patients becoming violent, some within 2 days of her fixing them up. Eventually, Macones and her assistant hid in the storage closet, until the men found them and pulled her assistant out. She claimed that she was the only one whom remained.

Upon returning to the room, Gale states that Paul's body is shutting down. She wheels him on a stretcher into a double-doored room she had stuck a wooden bar into, which is later revealed to be filled with walkers. Paul wakes up within moments of Gale leaving, quickly realizing that he is in danger as the walkers notice him.

Gale returns to a distraught Karina, who begins recalling a time when she killed a man, believing him to be a walker, and leaving his young daughter alone in the woods. She believes that it's her punishment to die alone, just like the young girl. Karina takes out her revolver, stating, "It's a shame you can't prescribe bullets." Macones then begins to explain that she can provide another way. She straps Karina to the bed in the same way she had with Paul, and takes out a needle and three vials of medicine.

Meanwhile, inside of the walker-infested room, Paul manages to free himself and kills a reanimated police officer with an extinguisher, and picks up the gun he had, shooting a couple more of them. He successfully busts his way out of the room and shuts it once more with the bar of wood. He calls out for Karina, and begins looking around for her. He enters the room they were in, only visible to her within the last few moments of her consciousness. It was revealed that Gale had given her a lethal injection, and was not aware that Paul was really alive.

Paul looks down at Karina, distraught, and begins angrily questioning the doctor. She delivers a speech of how she provides people with a choice between fighting for life and a nonviolent, "peaceful" way of not dying alone. Paul raises his gun at her, which she openly welcomes. Paul gives a short narration of his decision to continue living with Karina as the scene then cuts to him spray-painting "DON'T OPEN, DEAD INSIDE" on the double-door, and pulling a reanimated Karina's teeth out, binding her arms, and taking her into the car they found earlier.

This is a list of the Cast in The Walking Dead Webisodes: The Oath. 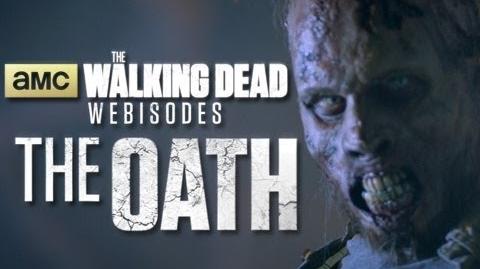 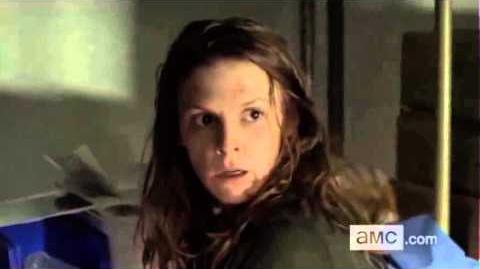