Rick123Axel is responsible for this interview, conducted on October 30, 2013.

Arthur Bridgers is an actor who portrays Woodbury thug Crowley on AMC's The Walking Dead.

TWD Wiki: Did you watch the show or read the graphic novel prior to your role?

I had seen a few episodes, though, admittedly, I hadn't watched as much as I should have.

TWD Wiki: Who is your favorite character?

This is probably going to sound weird, but I like the Bowman from the Governor's crew. I've always been a fan of the strong, silent type.

TWD Wiki: What is the atmosphere like on the set of such a serious, dramatic show?

It's actually pretty carefree. Of course, everyone takes their job very seriously, but they're not afraid to have fun with it. I could tell it was a big family. A somewhat dysfunctional one, but it was a blast to be a part of.

TWD Wiki: Did Crowley have a backstory which was not shown/cut? If not, did you create one for yourself?

The director gave me a few notes that had helped him from the character in his mind, but a great deal of freedom was given to me in that regard.

TWD Wiki: Are you allowed to share any of these notes? If so, what were they?

It was nothing very specific. He mentioned that he saw the character as having had some sort of quasi-military training; Maybe a wash-out or something like that. Probably grew up in the woods, doing a lot of hunting, so he's very familiar with firearms; Not so much on discipline.

There was a scene in the infirmary when we first captured Michonne and Andrew, before they met the Governor. Andrea and my character exchanged some pretty harsh words. Of course, as an actor, I like to lie awake at night and speculate as to why that scene was cut.

He'd probably be mad if he knew I told you about this, but oh well. We were shooting the scene in which we attack the National Guardsmen. We were between shots and there wasn't that much going on. Lawrence Kao (Tim) discharged his assault rifle, accidentally. It was only a blank, of course, but I've never seen a group of a hundred people all crap their pants at the same time. It wasn't all that funny at the time, but in retrospect, I find it pretty amusing. I still pick on him a bit for that.

TWD Wiki: What was the best thing about working on The Walking Dead?

It was all incredible and I regard it as nothing less than a once-in-a-lifetime opportunity. But for me, it was an absolute honor to meet and work with Greg Nicotero. Big fan.

TWD Wiki: When did you find out Crowley was going to be killed and what was it like shooting the scene where you are decapitated?

The production office sent me the script for that episode about two days before it was to be shot. Admittedly, I was a little disappointed to have my time on the show end so quickly, but if you have to go... Why not get your head cut off? It was pretty interesting to be coached by such a worthy special effects team. That was a long day, for sure... but it was well worth it.

TWD Wiki: If a zombie apocalypse were to happen, would you rather be in Woodbury or the prison?

I think I'd have to go with Woodbury. At least they can maintain some of how life used to be. I don't like the implication of living in a prison. Why would anyone ever choose to do that?

TWD Wiki: Are you currently working on anything interesting that you can reveal?

Not at the moment. It was a pretty busy year, so I'm treating my wife and daughter to a nice, long vacation.

TWD Wiki: Thank you again on behalf of the entire wiki! We appreciate it very much and we all hope you enjoy your vacation.

Thank you for having me. 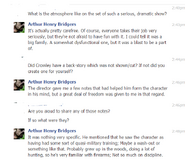 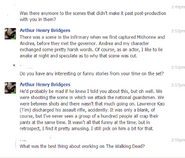 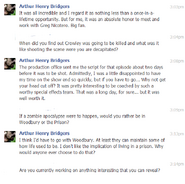 Retrieved from "https://walkingdead.fandom.com/wiki/The_Walking_Dead_Wiki_Interviews/Arthur_Bridgers?oldid=651966"
Community content is available under CC-BY-SA unless otherwise noted.