Rick123Axel is responsible for this interview, conducted on October 8, 2013.

Dango Nguyen is an actor who portrays an unnamed Woodbury soldier on AMC's The Walking Dead.

TWD Wiki: Did you watch the show prior to your role?

I had caught a couple of episodes, but I wasn't a follower. However, my son was, and was super psyched when he found out I was going to be on it

TWD Wiki: How did you come to work on The Walking Dead?

I had worked on a couple of different sets, and made some contacts. A friend of mine noticed in an ad on Facebook looking for "mean bodyguard" types. It didn't list that it was for The Walking Dead. So I didn't know until I got the part.

TWD Wiki: How is it like to work on the set?

It was great! The cast and crew are awesome. You start out thinking you are working on a TV show. But, then as you start filming, it all seems so real. You almost get transported to Woodbury. LOL.

TWD Wiki: Did your character have a name or a backstory which was not shown or cut? If not, did you make up one for yourself?

I didn't I would always just be listed as Mean Guard. LOL. I'm not mean! I had visions of my character hooking up with the group after the battle with the Governor. I could see me and Daryl Dixon pairing up, tracking and hunting together.

Not that I'm aware of. There were times I didn't show up on screen, but it was just because of the angle they used in that particular shot.

The whole experience was interesting and funny! We all had so much fun. But I remember being on set when we were filming episode 8 I think. I was leading Norman Reedus into the arena with the bag over his head. We were standing in the wings waiting to walk out, and I said to him, "It;s not looking good for you Norman." He said, "Yeah, it's really not." So I started quoting his line from Boondock Saints, "And shepards we shall be..... In Nomeni Patri Et Fili Spiritus Sancti." He laughed and said, "yeah break out the pennies for my eyes!"

TWD Wiki: Are you currently working on any other projects?

I have a couple of spots coming up, nothing I can say though at the moment.

TWD Wiki: How were you selected to be the guy that was killed by Merle Dixon?

I'm not entirely sure. Other than I heard talk that they needed someone recognizable to make an impact.

TWD Wiki: On the behalf of the Walking Dead Wiki, I want to say thank you. And best of luck to you in the future!

Thank you. It has been my pleasure. 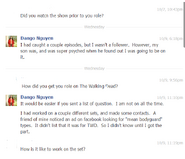 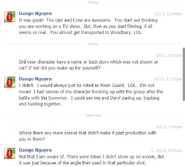 Retrieved from "https://walkingdead.fandom.com/wiki/The_Walking_Dead_Wiki_Interviews/Dango_Nguyen?oldid=1330801"
Community content is available under CC-BY-SA unless otherwise noted.