Rick123Axel is responsible for this interview, conducted on October 8, 2013.

Meaghan Caddy is an actress who portrays Woodbury resident Eileen on AMC's The Walking Dead.

TWD Wiki: Did you watch the show prior to your role?

TWD Wiki: How did you come to work on The Walking Dead?

I was booked through a casting company, but I was originally booked as a zombie.

TWD Wiki: How is it like to work on the set?

It's awesome! Everyone is so friendly and happy to be there. I loved working on the show. There's always something fun happening on set, so it was exciting every day I went to work.

TWD Wiki: Did your character have a name or a backstory which was not shown or cut? If not, did you make up one for yourself?

They didn't give me a backstory, but everyone would joke about who my baby's dad was. I don't know if they will ever reveal that or they'll even mention Eileen again. They gave me a wedding ring, but never told me who I was married to so I just assumed my husband died. I think Eileen is in the comic books but I haven't gotten a chance to read them yet and the show doesn't follow them exactly.

I don't think so, there may have been small clips of a scene they didn't use.

TWD Wiki: Have you been called back by The Walking Dead?

Not yet, but I'm still hopeful.

Every time I see people from The Walking Dead on other sets they call me preggers or poke my stomach and say something about finally having the baby because I looked like I was 8 months pregnant the whole time I worked on the show, which was about 4 months.

TWD Wiki: Are you currently working on any other projects?

Not at the moment, I'm on my last year of college and that takes up almost all of my time.

TWD Wiki: Why was your character not featured in the finale of Season 3?

Honestly, I don't know. I wish I did.

TWD Wiki: On the behalf of the Walking Dead Wiki, I want to say thank you. And best of luck to you in the future! 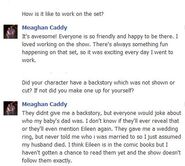 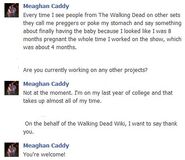 Retrieved from "https://walkingdead.fandom.com/wiki/The_Walking_Dead_Wiki_Interviews/Meaghan_Caddy?oldid=779414"
Community content is available under CC-BY-SA unless otherwise noted.