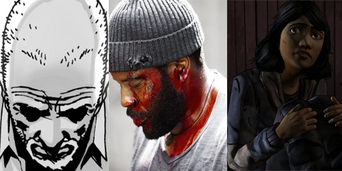 Depression is a recurring theme in The Walking Dead. It is an emotion felt by characters in a period of time accompanied by feelings of hopelessness and inadequacy. It is much more common in this apocalyptic world where death is everywhere.

Retrieved from "https://walkingdead.fandom.com/wiki/Themes:_Depression?oldid=1488154"
Community content is available under CC-BY-SA unless otherwise noted.