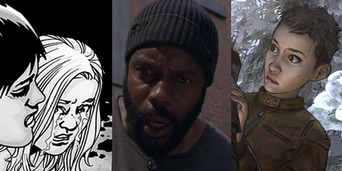 Fear is a recurring theme in The Walking Dead. It is expressed by most characters when scared due to facing uncertainty or insurmountable odds. It is a strong emotion that can act as a powerful motivator or, conversely, hinder a person's ability to act.

Retrieved from "https://walkingdead.fandom.com/wiki/Themes:_Fear?oldid=1384176"
Community content is available under CC-BY-SA unless otherwise noted.