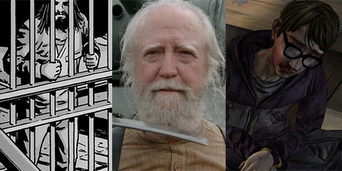 Punishment is a recurring theme in The Walking Dead. It is the infliction or imposition of a penalty as retribution for an offense, commonly in the form of imprisonment, torture, or death. It is sometimes conflated with revenge, although it is usually more formal and less driven by emotion.

Retrieved from "https://walkingdead.fandom.com/wiki/Themes:_Punishment?oldid=1384178"
Community content is available under CC-BY-SA unless otherwise noted.