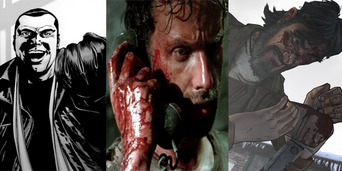 Sanity is a recurring theme in The Walking Dead. It is the ability to think and behave in a normal and rational manner. Many characters lose this ability during the zombie apocalypse. Typically, the loss of one's sanity is attributed to the death of a close family member, friend, or by a harrowing event.

Retrieved from "https://walkingdead.fandom.com/wiki/Themes:_Sanity?oldid=1497212"
Community content is available under CC-BY-SA unless otherwise noted.