"Thicker Than Water", retitled Episode 14, is the fourth episode of Telltale Games' The Walking Dead: A New Frontier.

It was released on April 25th, 2017 for PC via Steam and the Telltale Store, PlayStation Network, Xbox Live, iOS, and Android worldwide, and on January 21st, 2020 for Nintendo Switch.

When the community is threatened from within, Javier manages unlikely alliances for the safety of his loved ones.

In a flashback, Javier and David are at a park doing baseball practice. They are talking about Javier's recent ban and David's decision to leave the family. Suddenly, a kid comes and asks Javier if he can sign her baseball. Javier can choose to agree or disagree. The kid leaves and Javier and David finish their practice. David asks Javier if he can take care of his family, after he leaves to join the military.

If Javier agrees, David thanks him and he is glad that his brother is there for him. They decide to leave and David offers to buy Javier a beer.

If Javier disagrees and tells David that it is his own responsibility, and should with that himself. David says that he thought Javier was there for him. He storms off and leaves the park without Javier.

Back in the present, David and Javier are trapped in the New Frontier's jail cell. If Rufus was spared in the first episode, he is seen putting Javier and David in the quarintine room. Javier pleads for his help but Rufus sarcastically says the only help he is getting is not being shot.

If Max was killed, it is revealed that in the shootout that David started, he killed Lonnie (Determinant) which is the reason why they are locked in the cell.

If Max was spared, David and Javier are still thrown into the jail cell for sneaking Javier into the camp.

David will either scream at Javi and briefly fight him for trying to leave Richmond without him or thank Javi for supporting him through all of this.

Joan comes in and demands to talk to David about some problems and issues, she takes David away. Javi tries to follow him but is locked out.

Javi is trapped alone and tries to find a way out, after searching, he finds a loose window at the other side of the room. He tries to break it open but has difficulty.

Gabe/Kate appears depending on whether you chose to stick with David's plan or to leave with Kate. Gabe/Kate breaks you out and you head with him/her.

They arrive and hear Tripp and Eleanor arguing about their relationship: Tripp suggests they should be a couple again, and Eleanor seems confused and uninterested.The door opens and Kate/Gabe and Conrad (Determinant) greet them at the door. Now here, Tripp comes in, greets them and notices that they overheard their argument, but shrugs it off. Ava comes in and asks where David is, and Javi explains that he was taken away from Joan (Determinant).

Eleanor tells Javi and Gabe/Kate to look out the window, and they do, revealing a huge herd of zombies outside the New Frontier Gates. Eleanor says even after they are able to rescue David, they will still have another issue to deal with on escaping. They make a plan, and Javi and Gabe are assigned to get guns from the armory.

Javier and Gabe, along with Ava, make their way to the Armoury. Ava distracts Bob, the guard at the door, and Javier and Gabe sneak inside (Determinant).  Javier and Gabe take guns and ammunition, as well as collecting Javier's baseball bat that was confiscated earlier. They meet up with Ava, who tells them to head to the entrance (Determinant). However, on their way, they encounter a guard. Gabe will burst out of the closet the two hide in to attack the guard, doing minimal damage: Javier and the guard will fight, resulting in a shoulder injury for Javier, and the guard being stuffed, unconscious, into the closet.

Ava suggests that they head for the medical center, as - due to his friendship with David - Dr Lingard will help. When they arrive, Ava and Gabe keep watch while Javier meets Lingard - who is unconscious after injecting himself with drugs. Javier also disturbs Clementine, who has snuck in to ask Dr Lingard about AJ. Clementine also reveals she is looking for sanitary items, as she has started her period, but does not understand what it means.

Clementine offers to stitch up Javier's shoulder injury, showing her own scar, from All That Remains, if Javier asks her if she has stitched a wound before.

A flashback will happen depending on your choice of going with Kenny or Jane in No Going Back before another flashback to Clementine being met by Ava after Clementine's exile from the New Frontier.

After both flashbacks, Clementine finishes stitching Javi's arm and Lingard wakes up soon after. Lingard asks about David and tells Javier and Clementine about how David took care of AJ and helped Lingard himself care about his life, other people and Richmond. Lingard asks Javier to kill him with a lethal injection because he fears for David's life and he offers to tell Clementine where AJ is in exchange. If Javier or Clementine (if Javier makes no decision) accepts the deal, Lingard reveals that AJ is located at the McCarroll Ranch before being killed by whoever accepted the deal; if the deal is rejected, Lingard is simply left alone and Javier and an unhappy Clementine meet up with Ava and Gabe and leave.

Javier, Ava and Gabe return with Clementine to where they had originally made their plan to go to the armory. Javier and the others make a plan to stop Joan and escape using a truck. If Conrad is still alive he leaves the group at this point. Javier decides that he, Clementine, Kate and Gabe will go after the truck, Tripp says that he and Eleanor will gather supplies and Ava arranges to meet them at the town square.

Javier, Clementine, Kate and Gabe set out to find the truck and Javier finds it in a garage after some searching. Javier and Clementine notice some people in a separate area of the garage and hide at the nearest side of the truck. Gabe and Kate enter the garage and Javier suggests that Kate steers the truck while he and the others push it so that they can move the truck without alerting the people. When the truck is out of the garage they find that there is no ignition key and Javier hotwires it after finding a hammer and wire cutters.

After hotwiring the truck and driving away, Javier tells Kate that they now just have to wait for Ava to contact them over walkie-talkie. Javier and Kate talk and Gabe and Clementine play Euchre, a card game, while they rest near the town square. During their conversation, Kate confesses her love to Javier and asks if he feels the same way. However Javier responds, Ava finally contacts them afterwards alerting them to Joan's plan to hang David and begins to tell them to get to the square before her speech is cut off. Javier, Gabe and Clementine then head to the town square with Kate staying in the truck either because she is upset with how Javier responded to her and Javier leaves her alone and upset or as a part of the plan that she tells Javier before they give each other a goodbye kiss.

Javier, Clementine and Gabriel arrive at the town square. Joan begins her speech, and sentences David to death by hanging for his actions. After David accuses her of lying, Joan reveals one (Badger), two (Badger and Dr. Lingard), three (Badger, Max and Lonnie) or four (Badger, Max, Lonnie and Dr. Lingard) corpses of people Javier and David killed as evidence.

Joan notices Javier, and invites him to speak publicly in front of the crowd. She reveals that she has had a conversation with Eleanor, with her revealing the group's plan - which she has either done intentionally or accidentally, depending if you killed Conrad or not back in Ties That Bind - Part 2, and knows Javier's plan to take her out/rally the people against her, and commands two of the guards to bring out Ava and Tripp, who have been both captured.

Clint, after witnessing Tripp/Ava's death, attempts to resolve the conflict and urges to strike a deal with Javier - take David and the rest of his group out of there, and do not come back. Joan disagrees, but Clint forces her to cooperate. David, enraged, tells Javier to shoot Joan. At this point, the player is presented with a choice, negotiate and accept the deal, or shoot Joan dead.

Shoot Joan: Javier shoots Joan in the eye, killing her instantly. A guard hangs David, as he begins to choke. This sparks a shootout within the square. After using a few people as a meat shield to hide behind and killing a few guards, Javi and Gabriel assist David and save his life. They take cover, and they see Clint escaping amid the chaos. David goes after him along with Ava (Determinant), and urges Gabriel to go as well. Javier can either let him go or make Gabe stay with him.

Accept the Deal: Clint frees David from his restrains. As David makes an ominous smile, he goes against the deal, and disarms a member of the New Frontier, taking his gun and taking Clint for a hostage, threatening to shoot him. While David is distracted by Javier and Joan, Clint manages to free himself and attempts to wrestle the gun away from David. This sparks a shootout within the square. After using a few people as a meat shield to hide behind and killing a few guards, Javi and Gabriel assist David, with David managing to shoot Clint in the head. They take cover, and they see Joan escaping amid the chaos. David goes after her along with Ava (Determinant), and urges Gabriel to go as well, Javier can either let him go or make Gabe stay with him.

This next part is non-determinant and happens regardless of the player's decisions:

After Javier managing to find Clementine and take cover, Kate contacts him on the walkie-talkie and asks what is happening at Javi's location. She asks if she can come, and regardless of the player's choice, she will proceed to drive the truck towards them. A Richmond guard throws a smoke bomb at Javier and Clementine, making them come out of their cover. If Conrad did not die in Ties That Bind - Part 2 and Above the Law, he returns just in time to help Javier with the guard, shooting him.

Kate appears with the truck, as another guard throws a molotov cocktail at the truck's engine. As the smoke bomb reduces Kate's vision and the fire from the molotov spreading, she begins to uncontrollably maneuver the truck, driving towards the group. If Javier does not manage to evade the truck in time and has saved Conrad, Conrad will sacrifice to save Javi, being hit by the truck. Kate then crashes into a fence, as gas starts leaking out of the truck. The truck explodes, and the fence has been broken, letting dozens of walkers inside. The people of Richmond flee in terror, as the screen cuts to black.

Did you promise that you would help Kate with the family if David left?

How did you respond to Dr. Lingard's request?

Did you tell Kate that you have feelings for her?

Who did you try to save at the execution?

Did you shoot Joan or take Clint's deal?

This list shows the narrative consequences affected by choices from previous episodes of Season 2 and 3. 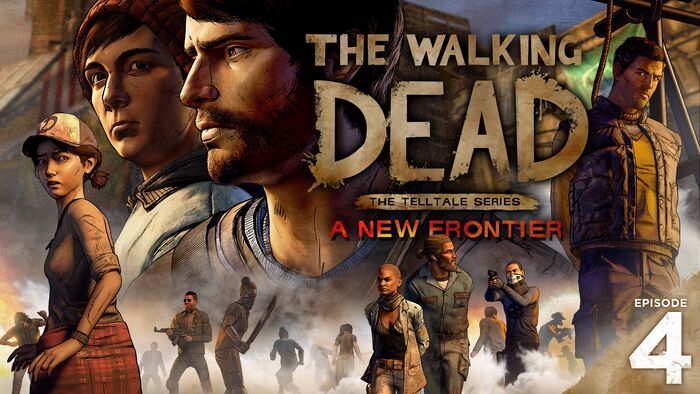 Start a Discussion Discussions about Thicker Than Water