"Ties That Bind"[1], retitled "Episode 12", is the second episode of Telltale Games' The Walking Dead: A New Frontier. It is a two-episode premiere, with the first part also named "Ties That Bind".[2]

Both parts of the premiere were said to be released on December 20, 2016 for PC via Steam and the Telltale Store, for Playstation Network, Xbox Live Arcade, iOS, and Android worldwide. They were instead released in North America on the 19th and then released worldwide on the 21st,[3] and then on January 21, 2020, also worldwide, for Nintendo Switch.

In the wake of escalating trouble, Javier leads a group of refugees towards the safety of a nearby town.

The episode opens with a flashback taking place in the García residence, prior to the apocalypse. While Kate is doing the dishes, Javier insists on helping her. They have a conversation about Javier, eventually leading to them talking about running away and having a fresh start together. Kate then accidentally smashes David's military glass and cuts her hand. Javier helps her, and Kate holds onto his hand. The player can either hold on or let go. David then walks in, leading to a confrontation where the player can either tell David off, saying that he needs to open his eyes, and that Kate is going to leave him, or let it go.

If the player chose to stay with Clementine: Javier wakes up, asking what happened. Clementine then explains to him who the New Frontier are and that they managed to get away. She also tells him that while he was asleep she had dug a grave for Mariana. Javier takes Mari's body to the grave and emotionally buries her, saying she was like a daughter to him. The player can either bury the cassette player with her or keep it as a keepsake. Javier and Clementine then make their way to Prescott, seeing that Kate has already had surgery for her bullet wound.

If the player chose to go with their family: After the flashback, the game cuts to Kate screaming in the Prescott infirmary, as Eleanor performs surgery on her. Eleanor finds out that the bullet has not passed through Kate's body and must be pulled out. Gabriel can either be allowed to help, or turned away by Javier. Eleanor then successfully gets the bullets out of Kate's body, and allows Kate to rest.

After talking to Eleanor about Kate's condition, Javier can then explore Prescott. Javier goes over to talk to Tripp to find out where Gabriel is. Tripp tells Javier that Gabriel has stormed off outside of the gate after Kate's surgery. He also tells Javier that he is welcome to stay in Prescott as long as he would like to.

Javier then has a talk to Gabriel about how Gabriel feels he is useless, and that he wishes he was more like his father who "knew how to be a man".

The peace at Prescott is cut short as the New Frontier arrive to seek revenge for the deaths of their group, with Francine as a hostage. The New Frontier, led by the aggressive Badger and the temperamental but reasonable Max, spew conflicting arguments with Javi and Clementine on who shot first, and they ultimately decide that Javi should be brought out to answer for their group's deaths. Whether or not Javi surrenders, a firefight ensues, with Francine among the casualties. Despite Max's reluctance, Badger orders the New Frontier to ram the gate with a truck filled with walkers. In the ensuing chaos, Javi manages to escape with Clementine, Kate, Gabe, Eleanor, Tripp and Conrad, while Prescott is overrun and its inhabitants killed by the walkers and the New Frontier.

As the group stops to recover, a distressed Conrad blames Javi for the loss of his home and his wife, which makes Gabe point his gun at him; Javi diffuses the situation. The group decides to head for Richmond, a community which they believe has the medical needs for Kate. Gabe and Clementine begin to grow close to each other. When the group remove wrecked cars blocking the road, several walkers converge on the group's loud noise. The group tells Eleanor to go ahead with Kate to Richmond, while the rest of the group flee to higher ground. Javi realizes that they are being watched; the group confronts the man: Paul "Jesus" Monroe. Jesus is also headed to Richmond, which is now taken over by the New Frontier. Shocked at this revelation, the group agrees to accompany Jesus to an unused train tunnel that could lead them to Richmond. After flashing back to meeting one of the New Frontier while protecting AJ, Clementine discloses to Javi that she used to be part of the New Frontier, and has their mark on her arm. The group realizes that the tunnels are overrun, and they fight their way out. They approach a boxcar, where they successfully barricade themselves from the undead as Tripp and Jesus escape. A desperate Conrad confronts the remaining three, as he overheard the conversation of Javi and Clementine, and forces Clementine to reveal her mark to Gabe. Conrad holds Gabe hostage and tells Javi about his plan to use Clementine to bargain with the New Frontier to get what they want.

If Javier agrees to Conrad's plan: Conrad releases Gabe, and Clementine and Gabe call Javi a traitor. The four catch up with Tripp and Jesus outside, and they disclose Clementine's former affiliation with the New Frontier.

If Javier rejects Conrad's plan: Javier shoots and kills Conrad, which stuns Gabe. Clementine decides to break off from the group, as she does not want to return to the New Frontier.

As the remaining members of the group head toward Richmond, they spot Eleanor's car with Kate still inside and Eleanor missing and presumably taken by the New Frontier. Driven to desperation at Kate's worsening state, Javi decides to approach the New Frontier at the gates of Richmond, with the hope that they will give Kate medical care. Max meets them at the gates, and Javi attempts to persuade him to let them in. Either way, Max opens the gates with several members confronting them at gunpoint. The group is stunned when they realize that David is the leader of the New Frontier.

How did you deal with Kate and David's argument?

How did you handle the New Frontier at the gates of Prescott?

Did you trust Jesus?

How did you deal with Conrad's threat to Clementine?

How did you get into Richmond? 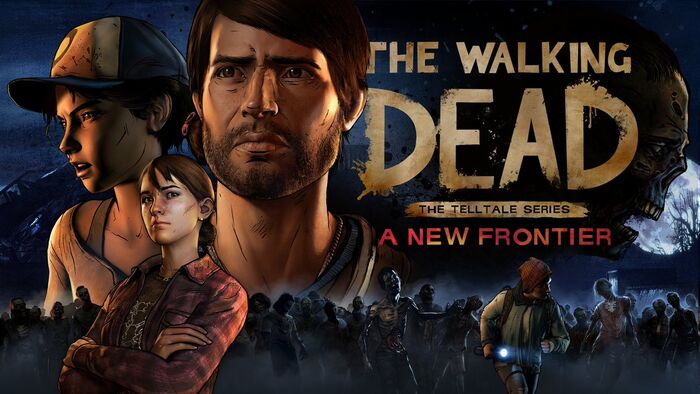 Start a Discussion Discussions about Ties That Bind - Part 2